Today I'm starting an experiment, or rather resuming an old one. I'm trying to see if I can write a short story a week for a year. I'd started at New Year's 2018, but only made it through February. Now I've started again, though I'll need to catch up with what I've already written. I originally wrote the following story in January, and involved a ton of research—at least, whatever I could do from my desk at work—which still exists as comments in my Google Document.

The stories in this series will, by and large, be published with minimal editing—mostly for clarity—and without beta readers. I used http://www.can-i-get-a.com/, which is primarily for improv comedians, to generate a prompt. This time, the prompt was: 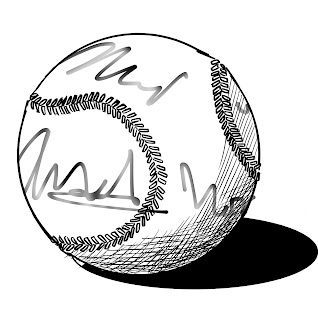 His boots splashed through the mud as the rain poured into the trench. Private First Class Bert Longing had thought he was done with the firing line for another week. He'd already rotated out of there to the support line, and from the support line to the reserve line. He didn't care how much ditch-digging they had for him back at camp, he was always glad to go. All he needed was a ball, but nobody at camp had one. Lance Corporal Fred Guilder followed behind him with the catcher's mitt a buddy in Flanders had relayed to him. Bert had promised everyone on base that as soon as they were rested, they could play some baseball. Freddie said he knew who'd have a baseball, but Bert wouldn't like where he'd have to go to get it.

"I'm telling ya, Freddie," Bert said, "this guy better have the ball. He'd better be ready to cough it up." He stretched his leg over Pvt. Kearney, who was fast asleep, using his haversack as a pillow. Amazing he could sleep, with all the gunfire in the distance, or the stink from the soggy clothes and shitholes around here. Bert could hardly manage a few hours of sleep a day.

"And this had better be a good game," said Freddie, in what he'd told Bert was a Northern accent. Machine gun fire roared from further down the trench. They were almost at the end of the communication line.

"Oh, you're gonna love it. It's relaxing, it's exciting, all at the same time. Ever look at the inside of a watch and think, 'man, all those gears working together, that's neat'? That's baseball."

"Yes, I've seen it. Saw a game being played in a park once. A little like Cricket."

"Nah, it's nothing like Cricket. Cricket's all bludgers and beaters and quaffers and who can follow that? Baseball's just... I dunno, elegant."

"Take my word for it? You'll know once you play." Something exploded, and Bert ducked before he realized it was almost a mile away. "You said the sarge is a baseball nut?"

"Oh yes, loves the game. Fell in love with it in the States. And he's got a ball he carries with him wherever he goes."

"Not especially, but I've always got along with him. Can't be that hard to convince." Freddie patted the back of a Private beside him, who was posted by a peephole in the sandbags. "Yo, mate. You seen Sergeant Fillibrandt?"

The man pointed at the group clustered further down the trench. One stood by the parapet looking through a periscope, his sergeant's stripes slashed across one drab khaki sleeve. Bert and Fred hurried over to him.

Sergeant Arnold Fillibrandt looked down. "Make it quick, Corporal. I think the Krauts are up to something." His voice sounded like the bark of a golden retriever, if that golden retriever had been educated at a fancy English college. He glanced over at them. "Are you supposed to be here?"

"No, we're due for our rest period. But we had something wanted to ask you. I've heard you like baseball."

"I do, very much." Fillibrandt peered through his binoculars over the parapet. "But is this really the time or the place?"

"I thought you looked like a Doughboy. What do you want?"

"Well, sir, the boys heading to camp want to play a game, but they're low on supplies. Corporal Guilder was telling me you might have a ball, sir."

His eyebrows jumped up. "You came all this way, into this hellhole, all for a ball?"

He humphed. "Some people have no taste. I'll tell you, this is more than a mere collector's item." He checked the periscope again. "Hm. Fritz seems to be settling down, but I don't like the looks of those riflemen. Taylor!" He passed his periscope to the man beside him. "Don't take your eyes off them. If they make any sudden moves, I need to know yesterday!"

Sergeant Fillibrandt pulled Bert and Freddie around a corner to a communication line, where they at least weren't under immediate danger of enemy fire, and opened up his haversack. After digging through for a moment, he pulled out an item wrapped in cloth. He unwrapped it, revealing the white skin and red threads of a real baseball, with only a few patches of dirt on it, and a set of signatures. Bert wasn't the biggest fan of the Sox, but he knew Hooper's John Hancock when he saw it. "Impressive, sir."

"Let me rephrase that. Do you know how I wound up in Boston to attend a Red Sox game and acquire this ball?"

Bert shook his head. So did Freddie.

"I take it you two have heard of a vessel," Sgt. Fillibrandt said, "called the Titanic."

"The Titanic?" Bert said with a gasp. Just hearing the name brought back visions of his father's panicked face, and his sister's terrified grip.

Sgt. Fillibrandt continued, "Do you know that I was a passenger on that voyage?"

Bert could still smell the cold sea foam, still feel himself shivering with his sister in his arms...

"Yes! I was en route to an associate in Pittsburgh. Wound up on one of the lifeboats. My brother... didn't make it. Bereft of money and possessions, I found a relative who let me stay in an apartment in Boston. I took a job at a cafe, and to pass the time, attended Boston Red Sox games until I could return to my true home. I tell you boys, I missed Cricket, but the simplicity, the elegance, the sheer fun of baseball turned out to be a great comfort to my grieving heart. I caught this ball during one game, and the players were kind enough to give me an autograph. I still correspond with the players, and consider them dear friends."

"So it's something like a good luck charm," said Freddie.

"Oh, more than that. It's a reminder of the brotherhood and camaraderie that's going to get us out of this circle of hell alive!"

"You were on the Titanic?" Bert said.

Sgt. Fillibrandt's eyes widened. "Why, you would have been just a boy."

"Fourteen, to be exact," Bert said. "We'd been on vacation in Merry Old England, and managed to snag tickets back on the Titanic. For a few days we were having the time of our lives, me and my little sister. Then the iceberg hit, and..." He felt his throat tighten up. Since that night, he'd seen men shredded by gunfire and torched by bombs, but that night stuck with him more than anything. He'd never lost so much, before or since.

"Thank you, sir. The last thing I remember before the liferaft lowered was my father telling me and my sister to stay put. He'd find our mom and join up with us once we got rescued. Women and children first, you know? I never saw either of them again."

"Our grandparents took us in, but they were pretty old. I basically had to be a dad to my sister for a while. Worked odd jobs, did a lot of the cleaning and cooking. That's why I enlisted for all this. I figure with the salary and pension, Molly and I can get by."

Sgt. Fillibrandt nodded, pinching his lips together. "For fate to bring the two of us together..."

"Listen, you can keep the ball. We're wasting your time and risking our lives. We just wanted to ask. If I'd known you went through—"

"No, take it." Sgt. Fillibrandt tossed the ball. Freddie caught it in his mitt. "And take with it my camaraderie and brotherhood." He grasped Bert by the shoulder, then pulled him in for a tight hug. "You've been through a great ordeal only to come into another. Take it with my best wishes for everyone at camp. Just promise you'll bring it back."

"Good." Sgt. Fillibrandt saluted. "And let me know who wins."

"Sir!" said the man at the periscope. "Enemy's on the move."

"All right." Turning to Bert and Freddie, he said, "At ease. Enjoy your leave."

Bert and Freddie returned to their station, gathered their things, and headed back down the communication line. The farther they could get from the firing line, the better. The stench of the latrines and the dried sweat faded, though they never faded completely. Bert and Freddie stayed low until the bullet fire was a distant rattle. Bert still had the baseball wrapped in a cloth in his hand.

"The Titanic?" Freddie said. "You never told me about that."

"Do you want to talk about the time you lost your parents?"

"My parents are still alive."

"There you go. Let's just get out of this damn trench and play ball. I heard they got some Canadian pitchers who kick some royal ass."

A Lieutenant marched his platoon the other way, toward the trench.

"Your funeral, guys," Bert muttered. "Besides," he added, returning the conversation to Freddie, "saying your parents died changes the tone one way. Saying they were killed on a boat changes it another way. Saying they were killed on the goddam Titanic just throws the tone outta the water. Then everybody wants to hear about the damn boat and the iceberg, and... well, let's say I just need a ton of beer in me."

"I see," said Freddie. "I confess, I would be interested in—"

A blast rocked the world behind them. A fireball flared into the sky, sending up pillars of smoke. Freddie and Bert were already halfway from the support line to the reserve line. The counterattack, if any, would be fought and over by the time they arrived.

"Wasn't that where the sarge was?" Bert said.

"It's where he was." Freddie put his hand on Bert's shoulders. "I pray he wasn't there."

Bert squeezed the cloth-wrapped ball in his fingers. "Think I'll ever get this ball back to him?"

"God willing," said Freddie. "Not sure I could count on it."

"I'll sure as hell do my best. He'll certainly be a hero back at camp."

They turned and walked down the road toward the base, with Sgt. Fillibrandt's camaraderie and brotherhood together with three Red Sox autographs in Bert's hand.