Weekly Story #4: Citrus is in Season

This week, it's a little story about underaged drinking. The prompt went like this:

CITRUS IS IN SEASON 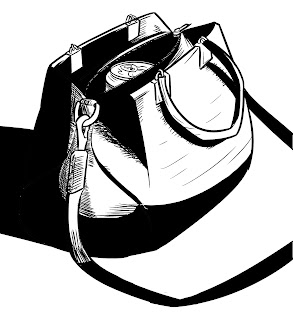 I am a freaking doormat. All little Kyden has to do is raise his eight-year-old voice a little, and I'll do whatever he says just to avoid a full-on tantrum. This time, even though he already had dinner before his parents went out to the movie, he demanded we go to McDonald's for a Happy Meal. I didn't even know they still made those.

So I grabbed my purse, strapped him into the backseat of the Passat my parents got me for my Sweet Sixteen, and drove five minutes through night-time traffic to the nearest Golden Arches. I drove up to the line for the drive-thru, when Kyden piped up, "I wanna eat in!"

I rolled my eyes and complied. My hope had been to get him home as soon as possible. Hopefully that movie was a long one.

I put the car into park and Kyden was out of the car before I'd even unbuckled my seat belt. I followed him to the door. Somehow my purse felt a little heavier than usual, but the important thing was to get this kid fed and out of here as soon as possible.

I wasn't too hungry, so I ordered a side salad with some unsweetened tea. Kyden, of course, wanted the Happy Meal with McNuggets, apple slices, and juice. A girl my age who looked like she'd also rather be anywhere else took my card. While we waited for them to fill up our tray, I gathered up some napkins with one hand and kept Kyden tethered with my other.

He peeked in and drew the purse open. "Whatcha got in here?"

"Hey!" I yanked it away from him. "Hands outta there."

"There's something in there." He reached in again, and raised up an elongated aluminum can. It took me a moment to notice the smiling orange slice with a mohawk wearing sunglasses.

I shoved it back in. "No!" I'd totally forgotten! It was a can of Shock Top I'd swiped from my brother's mini-fridge to save for later. Margot and I were planning to meet up whenever I was done looking after Kyden. The can still had some of its chill left. "Leave that alone."

"Nothing! Just forget about it."

I heard my number and took our food. We sat at one of the two-person booths along the window. Kyden sat where he could see the TV, but it was on CNN, and he definitely isn't the kind of eight-year-old who thinks that's interesting. He took out the food from the Happy Meal box, but more so he could get the toy inside. "Yes! Rocket Raccoon!" He took the figurine out of the wrapper and propped it up before he started eating. I squeezed the dressing out of the packet onto my salad.

This wasn't necessarily all bad. I got paid either way, and even after what I spent for this meal, I'd still make a profit. For a sixteen-year-old with a driver's license, that counts for a lot. At least he insisted on McDonald's and not something pricier, like an Applebee's. Tonight was a Friday, so no school for a few days. I still had hanging out with Margot to look forward to. I'd had all night to complain about this brat and his parents and school and the fact that none of the guys at school were interested in us. As long as Mommy and Daddy didn't find out I'd treated little Kyden to all this, everything would be fine.

So I got my phone out and got lost in Instagram as I forked the salad into my mouth, while Kyden dipped his McNuggets into his sauce and happily munched on them.

Hopefully that Shock Top wouldn't get too warm later, because I could have used a sip or two already. It was actually Margot herself who gave me my first beer after I got my license. How did anyone expect us to wait until we were 21 to start drinking? Between school, part-time work, and guys' wandering eyes, the occasionally tallboy was the least I could ask for. At least we weren't butt-chugging like frat boys or taking meth.

I noticed movement in the corner of my eye, and came out of my trance to find Kyden lifting the Shock Top out of my purse.

"Get out of there!" I snatched the purse and laid it on the seat between my leg and the wall.

"Wheat ale? Brewing?" Kyden tilted his eyebrow at me. "Is that a beer?"

A little bit of lettuce fell off my fork. "I'm grown up enough."

"But don't you have to be twenty-one? That's what the commercials say."

"I—" My brain locked up. That time, I didn't have an answer. My whole life I'd seen those exact same ads. Outsmarted by a third-grader!

"Quiet!" Heads were starting to turn at the other tables. "I am not. It's just the occasional drink here and there. That's not gonna hurt anybody."

"You really wanna keep it a secret?" He tilted his head to and fro to make it look like he was thinking really hard. "Okay. But first I want a sip of it."

"Absolutely not! I could get in serious trouble!"

"Please? You're the best babysitter I ever had."

"Trust me, you do not want this. It'll taste terrible."

"I just do, okay?" But I knew I'd still have to buy his silence somehow...

He pouted. "So why shouldn't I tell?"

I forced a smile across my face. "Because I'm the best babysitter you ever had?"

"But you drink beer," Kyden said. "Dad wouldn't like me having a babysitter who drank beer."

Kyden propped his chin in his hands and his elbows on the table. I felt like he had his tiny fingers wrapped around my throat.

I saw dark things from this kid in the future. His parents were a lawyer and a real estate agent, and they made a lot of money, and he knew it. Their whole lives were built on bargaining. Naturally that would have bled off onto their boy. Just tonight, he'd shown me the Pokémon cards he'd negotiated from other kids at school. If he wasn't careful, he could be a politician someday.

Maybe it wouldn't be too bad. I remembered when I was little, about four or five, and convinced my mom to let me have a sip of beer. And I'd spat it right out. It put me off of trying alcohol again for over a decade. Maybe it would have the same effect on him.

No, not even a drop. His parents would surely discover it somehow, and I'd have to figure out what to do with an open beer can anyway.

But I still needed something.

I am a doormat, especially with kids. I know that. But if I'm going to be a doormat, I can at least try to be a firm one. "No beer," I said. "How about ice cream?"

That slapped a grin on his face. "Ooh, I want Cold Stone."

"They have ice cream here."

"But Cold Stone's so much better. And they mix all that stuff in. And it's right down the road."

And it would probably set me back a few more dollars. Still... my money, or my life? "Fine. I'll get you whatever you want at Cold Stone, and you stay quiet about the beer. Deal?"

I shook his hand.

That didn't stop me from being tense as hell when his mom and dad got home. He liked the movie, but she kept falling asleep. While they told me more about it, I kept wondering when they'd smell the chocolate syrup on Kyden, or notice I made him change shirts because he dripped his ice cream on it. Kyden was still sugared up enough that he could blurt anything out. But so far, nothing.

"Well, enough about us," his father said as he took out his wallet. "How was your night?"

"We had a great time," Kyden said. "She took me to McDonald's, and got me a Happy Meal, and I got a Rocket Raccoon toy." He showed them the figurine he got.

His parents' eyes hit me like boiling oil. His dad's hand froze just inside the fold of his wallet. Of course I'd forget to make "keep our little outing secret" part of our "keep my beer secret" deal, wouldn't I?

His mom sighed. "Of course not." She tapped her husband's shoulder. "Give her a little extra."

His dad counted out fifty dollars—five more than I was due—and told Kyden to run up and brush his teeth.

"Thank you so much," I said as Kyden stomped up the stairs. "Let me know when you need me again."

"Sure thing. Just don't be afraid to put your foot down sometimes."

"Kyden can certainly be a handful," his mom said. "But you can always work something out with him."

"Ha, yeah." I stuffed the cash into my purse, next to the Shock Top can. "I certainly managed to do that tonight."

When I got into my car, I sent Margot a text message. I couldn't make it tonight. After all that, I just wanted to go home and rest, drink or no drink. We could meet up tomorrow instead.