Bit of a shorter one this time around. We're only a few weeks away from the end of my first batch of stories. After that, it will almost exclusively be stories written after July 1st, 2018. Thank you for reading! 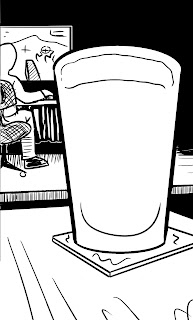 Pete looked out at the computer towers and monitors rigged up across the tables as the first players walked through the door. He'd made sure they'd scheduled it on one of his slow nights, when the bar wouldn't already be stuffed wall-to-wall. He just hoped they would spend enough to make up for the reduced space.

Samuel Long appeared right at the same time he did every day, and Pete poured him a Shiner Bock as he gave a token flash of his ID. Sammy was in his fifties, but Pete's manager had been clamping down on ID checks lately. A Chili's down the road had just had its license suspended for serving a 17-year-old. "What's going on, Pete?"

"LAN party," Peter said. "A friend of mine suggested it as a way to drum up business for the bar."

"And what is a lann party?"

"Basically, they're going to be hooking all those computers together so they can all compete in a video game. I think it's the newest Halo."

"No kidding. I played a little Wolfenstein back when that was new. Any way I can join in?"

"You'd have to ask Gordo, and he's not here yet. I think this is a full-blown tournament, so you'd have to register."

"Never mind then. I'm not interested enough to compete for it. What's the prize?"

The door swung open, and Gordo walked in with a massive duffel bag. He came to the bar and laid the bag down. "Evening, Pete. All set?"

The lights were dimmed, colored lights were dancing on the walls and ceiling, and the air was crammed full of noise, either from the game or the players. Pete had to stay at the bar to man the taps. He felt like he was at Cosmic Bowling. Occasionally Sammy would wander around, watching over the players' shoulders.

When he came back, he told Pete, "You know, I think I recognize one of those gamers."

"It's gonna bug me all night. I'm gonna be wondering who this guy is, and it's gonna come back to me next week, and I won't be able to do anything about it."

"Down there, on the left, in the short sleeve button-down."

"Don't worry, I'll figure it out sooner or later."

Sammy took his seat again, and Pete kept an eye on the man in the button-down shirt. Pete thought he looked familiar, too, but couldn't quite place him. Frankly, Pete needed to keep his attention on Sammy tonight. The man had gone through rehab earlier this year—not for alcohol abuse, but for cocaine. Sometimes, Pete wasn't sure how much beer Sammy should even have; his absolute cutoff was three drinks.

Sammy went out to explore the crowd again once he got his second drink. This time he started chatting people up, and remarkably, the younger guys had no problem cracking jokes along with a man in his fifties. After the arena match ended, Sammy returned to the bar.

"Man, now I wish I'd gotten into stuff like this. If I could've played Wolfenstein in a team, back on my old Windows 95 computer, I'd have been in heaven."

"I know what you mean," Pete said. "I have a lot of trouble getting into games nowadays, so lately I just watch people playing them on YouTube."

"Ever stop and think just how insane that is?"

Pete spotted a young man at the other end of the bar, who didn't seem to have a drink. "What can I get for you?"

"Oh, just a Diet Coke," the man said. "I'm not much of a drinker." His eyes were on the screen, which was providing a live feed of the game.

"Not a problem." Pete poured him one. "Need a food menu?"

"Not right now, thanks." The man looked pensive. He obviously had something he needed to say. If it affected the bar, Pete needed to know.

"Anything else I can help you with?"

"Well, okay, so..." The young man bobbed his head toward the end of the bar... toward Sammy. "You know that guy down there?"

"Sammy? Of course I do. He's one of our regulars."

"Okay, well, we were talking a few minutes ago, and he kept asking me these weird questions. I think he was trying to ask me if I snort coke, but really evasively. I overheard him trying to talk about crack with someone else. I don't wanna get anybody in trouble, but is he okay?"

Pete shook his head in dismay. "Shit. Thank you for telling me." He slid the Diet Coke forward and moved on to another customer. As he poured an IPA for that customer, he looked over at the man Sammy had pointed out, and finally knew where he'd seen him before. He headed back to Sammy. "Hey."

"That guy over there? With the button-down shirt?"

"His name's Kel Omeratos. He's the officer we called in to drive you to the hospital. You remember that night? When you OD'ed?"

Sammy said nothing, but he nodded slowly.

"Yeah. And just now, somebody was telling me how you were asking people about cocaine."

"Well, you know, this place, this whole event, it takes me back..."

"I understand, to the raves, the parties, the hookers?"

"I was just kind of putting some feelers out."

"Of course. Look, I don't want anything bad to come of this. If this whole night's going to be one big temptation, then maybe you need to be somewhere else."

"Oh come on, nobody here even has anything!"

"I'll bet they don't. And I'll bet Officer Kel over there doesn't, either. But then what happens after this? I hate to cut you off early, but after you're done with this one, i'm closing your tab."

"But it's only my second drink. You're no fun."

"Those guys are here to have fun. I'm here to make sure they keep having fun, not helping you relapse into a coke binge."

Sammy shook his head. "You know I don't want any trouble."

And that was that. Sammy closed out his tab, and Pete called him a taxi. It turned out not to be the only cab he'd call for somebody. The second-place winner of the tournament got so hammered he could barely stand up straight.

Frankly, tonight went a lot more smoothly than Pete could have hoped.