If there's anything I get wrong here about the process of accepting a short story for professional publication, I invite any editors to request a submission so I can learn☺.

There were five people in line ahead of her, but Lora knew it would be worth the wait. She still had an hour before her flight boarded. Once she got her waffle bowl of mint chocolate and Oreo ice cream covered with Cool Whip and sprinkles, that hour was going to be exquisite. It was her reward for hard work that had finally paid off.

She brought up her email on her phone and again read the editor's reply. We'd love to publish your story. Just looking at those words made her shiver. She'd written the story in January, subjected it to her creative writing class in February, then spent March torturing it into a manuscript ready for submission. The night before her flight home for the summer, she received the email from Mr. Monroe Cort offering her $240 for her story. She had danced a waltz with her roommate when she first saw the news.

The line shrank in no time, and the payment was barely a drop of syrup. Lora slurped her first heavenly spoonful of cold, sweet delight. Her first dessert as an author. Not just a student, not just a writer, but an author. A few more credits like this, and maybe she could sell somebody on that novel she'd been tinkering with.

A few sprinkles spilled onto the floor of Terminal A as she headed back to her gate. But they weren't going to bother anybody, especially not her. All she had to do now was sit, relax with her ebook reader, and enjoy her ice cream.

She bit the cherry off its stem. It was so sweet, she could hardly believe it was really fruit.

She started to sit down, but something seemed off. She could have sworn the plane had been sitting at the gate, yet it wasn't there. She could see clear to the tarmac from here. Had she missed something?

She checked her ticket. Yep. This was the wrong gate. The gate for Lora's flight was still a short walk ahead. Her excitement had made it feel shorter than it actually was.

Lora scooped some more ice cream into her mouth, then rushed from the chair past the phone-charging kiosk. A young man with a beard picked up his laptop and scooted out of his chair. When Lora thought he would go left, he went right, and crashed right into her.

The freshly-baked waffle cone flipped over her hand. She made a grab at it, but it was too late. Two flavors of ice cream, a swirl of whipped cream, and hundreds of rainbow-colored sprinkles splattered over the shoulder of a middle-aged man in a button-down shirt, who had been reading his tablet before disaster struck. A scoop of Oreo ice cream rolled onto his screen.

The man jumped out of his chair, cursing loudly. Creams both iced and whipped smeared down his shirt and pants. Sprinkles scattered onto the floor. The scoop dropped off his screen. He cursed again. "Why don't you watch where you're going?" 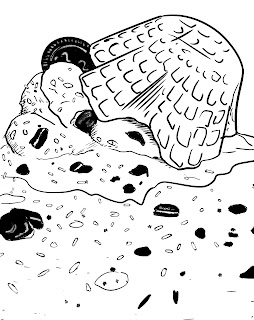 "I'm sorry! It's not my fault! This guy over here—" She pointed next to her, but the man with the beard was long gone. "What? No! Get back here, you coward!"

"Look at this!" the older man said. "These clothes were expensive! Just look! I have to go through a whole flight like this!"

"It was just an accident. I—I—please. How can I make it up to you?"

"I just can't believe this. Is anything going to go right today?"

"Hang on! I'll be right back!" Lora made a mad dash for the ladies' room for some paper towels. She had to wave at the dispenser several times to get enough. Each towel cranked out slowly like a term paper from her inkjet printer. She brought them back to the older man. "Here. I know it's not much." She plucked the cherry stem off his shoulder.

The man grumbled and rubbed the paper towels over himself. It took care of the frozen sludge, but the stains would remain through his whole flight. He used the last few paper towels to wipe the screen of his tablet. He never looked at Lora.

She didn't know what to say to him. She couldn't afford a new outfit for him. She couldn't wash it—there weren't exactly any laundry rooms around here. She could only endure the angry glances he occasionally sent her. At least she didn't have to share a plane with him.

He turned the tablet's screen on. "At least that's working."

And at least she didn't have to pay for a new tablet. That one looked more expensive than her laptop.

On the screen was a text document, double-spaced, in Times New Roman font, with words and sentences crossed out and new ones typed in. From here she could just barely read the header—the author's name, the story title, and the page number.

Her name. Her story title.

The man rolled his eyes and shook his head as if he couldn't believe she was still there. "If you must know, I'm an editor, and I was just going over this short story for the journal I work for."

"No kidding." Lora knew she recognized him from somewhere! This was Monroe Cort! The exact editor who had bought her story! She'd seen his picture on the journal's website! But did he have any idea who she was? "You know, I'm a writer."

"Do tell." He still didn't look at her. "Have I seen your work anywhere?"

"I only just sold my first story."

She halted the words in her throat. Any further, and she might give herself away. "Somewhere obscure. You wouldn't have heard of it."

"I see. This author here's something of a newcomer herself. Her style's a little flat, but her characters are quite rich. I look forward to meeting her one day."

"Aha." Her gut ached where his words bit her. Style's a little flat?! Nobody in Creative Writing 304 thought so. "Maybe that'll happen pretty soon." She definitely couldn't afford to anger him any further. Maybe he couldn't un-accept her story, but if he realized who she was, his editorial comments could go from harsh to downright murderous.

He wadded the paper towels into a single ball. "Look, let's just forget this ever happened."

"I still want to make it up to you somehow." Lora checked the time on her phone. Still plenty of time before boarding. "I'm getting myself some more ice cream. You want some? My treat."

Monroe Cort sighed. "I'm not exactly in the mood for ice cream."

"I'll get you anything! Candy bar! Chips! Beer!"

She walked with him to the nearest bar. He requested a craft IPA with an $8 price tag. Lora paid with her credit card, wrote down the tip, and signed the receipt. She hardly drank, so this was the first alcohol she'd bought since she turned 21 in December. Really the least she could do considering what she'd done to Cort's outfit.

"Again, I'm really sorry," Lora said on her way out of the bar. Now she could go get another bowl of ice cream, and this time, she was going to eat it in the food court. Nowhere near a crowded gate or any splatterable editors. "All things considered, have a nice flight."

Cold, bitter death coursed through her veins. That's right, her name was on that receipt, wasn't it? Her real name. First and last.

Her editor waved at her. "I'll have the comments ready in a few days. See you next issue."

Lora ran off, and hardly looked up from her feet until she stepped off the plane. She only had one thought on her mind the entire flight: I should've used a pseudonym.