This one was kind of a fun goof. I took as an opportunity to try writing something like a silent protagonist. Normally I only see that in video games (Legend of Zelda, Chrono Trigger), and I did have to give the main character one line, but it was an interesting experiment. 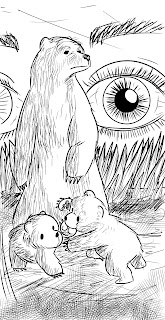 There was one booth at the tech convention that especially caused a stir. To the left of the people that scan your face to 3-D print a sculpture stood a man in a ringmaster's costume. He stood behind an aquarium he had filled with soil, grass, and small plants. A sign hung off the front of the table proclaiming "THE WORLD'S SMALLEST BEARS." I left the table promoting some new aerial drones and walked up for a better look. Two children, a boy and a girl, were gazing inside the aquarium.

The ringmaster leaned forward with a grin that lifted up his carefully sculpted mustache. "Thats because it is." He saw me and a few other passersby. "Come one come all." He spoke with more of a leisurely lilt than I expected from someone in his outfit. "I'm sure you've seen some incredible scientific marvels today, but none as spectacular as this."

"Can I hold it?" the girl said, ignoring me.

"Why certainly, my dear." The ringmaster reached into the aquarium, and picked up a small bundle of black fur. Considering the convention I was at, my first thought was that this was supposed to be a toy tribble. But then he lowered the bundle into the little girl's hands, and the head of a bear stretched out of the bundle and looked up at her face.

"Wow." The girl held it closer. The bear paced on all fours across her palms. She adjusted her hands to support it.

The boy ran a finger down the bear's back. The bear stood up and hollered, but its voice came out as only a squeak. Then it plopped back on its bottom.

"It's something I've been experimenting with for a while," the ringmaster said. He lifted a black case onto the table to the left of the aquarium and opened it up. It contained a device with a sleek, smooth shape with rings around the conical barrel, like the kind of toy ray gun you might have seen in the 50's. "The first ever real-life, functioning shrink ray."

"Oh, this is no toy," the ringmaster said. And I think it's time to put Mama Bear back. The cubs get antsy if she's away too long." The ringmaster pointed to a pair of tiny fuzzballs wrestling each other under one of the plants.

"Oh my gosh!" The girl was holding the mama bear as if it were a hamster. "Those are your babies? Here you go. Back to your family." She stood on her tiptoes, reached over the top edge of the aquarium, and placed the mother bear next to her cubs.

The bear wandered over to the cubs and started lying down close to them. The cubs noticed her and resumed their wrestling.

The boy pointed at the ray gun. "You really shrank them down using that?"

"Of course." The ringmaster picked the gun up out of the case. "And I'll be happy to offer a live demonstration." He turned around, pointed the gun at the chair behind him, and fired. A hazy beam emanated from the tip of the barrel. As soon as it touched the seat, the entire chair began to slowly shrink. He picked it up in one hand, and once it was small enough, set it on the table to the right of the aquarium. Soon it was so small it could only support a Barbie doll. Then, a G.I. Joe. Then, a Lego man.

The girl plucked the chair off the table. She and her brother both went "Whoa."

Finally I had a question. "Where did you get the bears?"

"They're on loan." The ringmaster's grin flattened a little. "From the Louisville Zoo."

"Interesting." I watched a fly hover down into the aquarium, and land a short distance from the cubs. The mama bear launched herself toward the fly, which zipped right out and fled over the crowd to some other part of the convention hall. I couldn't believe a zoo would let anyone do something like this.

Come to think of it, hadn't I heard something in the news about bears at a zoo recently?

"How do you feed them?" the boy said.

"I drop in a bite of fish every day," the ringmaster said. "A little bit of salmon can go a long way with three of them."

I brought up the news app on my phone. Hadn't there been some story involving bears recently? Nobody had died, but something had happened.

"How long have they been in there?" the boy said.

"A few weeks," the ringmaster said. "They love their new environment."

I kept scrolling through headlines. Not the one about the new polar bear exhibit... Not the almost-mauling out west...

"What happened to the extra mass?" the girl said, still holding the miniature chair. "If all you did was change the density, shouldn't they still be the same weight?"

The ringmaster's mustache twiched. "That's a very big question from such a small girl."

"Hoo boy," the boy said. "Better be careful. She won the blue ribbon at the state elementary science fair. And she reads all the time."

"That's right." The girl nodded with each word.

"Ah, haha, forgive my presumption." The ringmaster propped one hand on the table, his other hand still holding the ray gun. "Where are your parents, anyway?"

I found it. Exactly the headline I was looking for. From a Louisville newspaper, to boot.

The article described the animals as black bears that originally came from a preserve in British Columbia. Investigators found a hole in the zoo's main fence, but it was only big enough for a person—definitely not a fully-grown bear.

I looked at the black fur on the bears in the aquarium, then the oleaginous grin on the ringmaster's face. Something told me these bears were not really "on loan."

The girl was still trying to get a straight answer from the ringmaster about the bears' molecular density.

I coughed to get the ringmaster's attention and then showed him my screen.

His oily grin became an oily frown. "You're not suggesting what I think you are. Are you?"

"What is it? Lemme see." The girl grabbed my arm and twisted the phone toward her. "Mama bear and cubs..." She gasped.

"You stole them?" the boy said.

"No, no, this was all coordinated with the zoo," the ringmaster said. "One of the zookeepers must not have been told, and wound up kicking up a fuss over nothing. I'm sure our friend here must have missed the article that clarifies matters."

"I knew you were up to something." The girl jabbed her finger toward the ringmaster. "You crook! You thief!"

"Why are you shrinking bears, anyway?" the boy said. "What do you really want to do with that shrink ray?"

"Hey everybody!" the girl yelled. "This guy's using stolen bears for some mad science experiment!"

The ringmaster growled in frustration. "Well, if you won't recognize my invention's potential..." He pointed the ray gun at the girl. "Try it for yourself!"

Before any thought could cross my mind, I rammed into the little girl, knocking her into her brother. The hazy beam struck my right hip. At first it only felt like the heat of a hair dryer, but soon my whole body began to tingle. Heavy smoke filled my head. I couldn't seem to keep my legs under me.

The children both screamed, "SECURITY!" as I toppled toward the boy. He'd become a head taller than me.

The ringmaster shot out of the booth, shoving the table aside. The ray gun fell from the ringmaster's hand and clattered on the floor.

The boy hoisted me into his arms. His hands smelled like peanut butter.

The aquarium teetered on the edge, and began to tilt. The bears inside tried to run against the slope. The girl stooped down and managed to catch the aquarium.

The boy—who could now hold me in his hands—set me on the tabletop. There I sat and watched the giant boy help his giant little sister lift the aquarium back onto stable ground. The entire table trembled under me like an earthquake, and I fell onto my back.

I tried to lift myself up, still feeling like the world was tilt-a-whirling around me. The bears were only a short distance away, on top of what seemed to be a ledge just a little above me. The mama shook some dirt off and checked on her cubs. None of them seemed to have been harmed.

The mama bear looked at me. I tried to push myself away, to lift myself up, anything to get me out of her sight, but my whole body had locked up. She barreled forward, ready to launch herself off the ledge—

—and her head thudded against the glass.

The mama bear stumbled back as I finally got to my feet. She belted out a mighty squeak at me. The glass was thick enough that she couldn't possibly bust through.

"Are you okay?" The girl's voice pounded down from above. I couldn't tell if she was talking to me or the bears.

"We really owe you one," the boy said. Listening to him was like standing in the middle of a monster truck rally. "Don't worry, security's after that carnival guy. Hopefully they'll figure out how to get the bears back to Louisville. And check it out—I managed to get this!"

He held up the ray gun, its rings still glowing.

"We'll get you back to normal, lickety-split!" the girl said.

"Now let's see..." The boy turned a knob on the side, then pointed the barrel of the ray gun directly at me. I think he spoke for everyone when he said, "I hope I know what I'm doing."