Weekly Story #9: A Keeper Worth Keeping

Not really sure I have much to say about this one. I wasn't aware until I started writing that most lighthouses are fully automated now, and don't even have keepers.

A KEEPER WORTH KEEPING 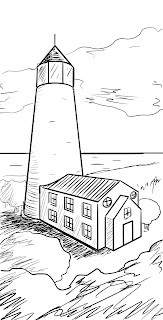 The lighthouse stood at a ten-minute walk from the beach, and a half-hour walk from the harbor where Kyle had landed. He'd planned on going on a bar crawl with his fellow sailors tonight, then coming back here to crash with Daniel. Most of the lighthouse's operations were automated, and most of the building surrounding it was unused. Daniel mostly served as a tour guide; with his experience as an electrician, he performed some of the maintenance. But Daniel needed Kyle tonight. He'd just been dumped.

Kyle strolled toward the lighthouse with his knapsack slung over his shoulder. Daniel was smoking on a deck overlooking the beach. "Door's open." He spoke as if he were lifting a refrigerator. Yeah, he was miserable, all right.

Kyle carried his bag in and laid it by the door. To his right, a staircase spiraled up the tower. To his left, the main building stretched out with the original keeper's quarters, kitchen, and bathroom. Staying here was going to save him some good money for a hotel room.

Daniel came down from the deck, his shoulders slumped.

"How you holding up?" Kyle said.

Kyle followed him down a hall past the kitchen. Dishes and pots and pans were piled up in the sink. Not that Kyle was much better about that, but Daniel usual took care of himself a little better than this. The room Kyle was sleeping in had once been the lighthouse workers' break room, and now was basically Daniel's mancave. Daniel opened the door. "Oh no. I knew I forgot something."

Kyle peeked in. And he thought the kitchen was a mess.

"Sorry," Daniel said. "Real sorry. Make yourself at home. I still need to pick up in here." Daniel went in and shut the door behind him, leaving Kyle out in the hall.

All this for a woman Daniel met, dated, and broke up with in the whole time Kyle had been out at sea.

Kyle leaned on the wall, waiting for Daniel to finish. Daniel always had a tendency to get overly invested in women, even to the point of self-destruction. When he dated a stoner, he was high about 90% of the time. When he dated a mountain climber, he wore himself out on rock faces. This latest one—Daniel never bothered to learn her name—seemed fairly average. Their Facebook posts were mostly dinners and walks on the beach.

Kyle knocked on the door. "Need any help in there?"

"I've got it. Just another minute."

Kyle didn't hear much going on. Was Daniel trying to stall or something? Kyle opened the door.

Papers, wrappers, and old pizza boxes lay scattered across the floor, on top of the sofa, over the coffee table. Movie posters hung loose on the walls—they were the same movies Daniel bragged about seeing with her on Facebook.

And Daniel, he was kneeling on the floor, as if in prayer, gazing at a framed photo of her. He set it down on its back. "Everything here reminds me of her. I meant to clear it all out, but..."

"But it would be like admitting she's gone, right?" Kyle knelt beside him and placed a hand on his shoulder. "You'll get through it, buddy. You always do."

"You must think I'm pathetic."

Kyle wouldn't have said it, but he couldn't deny what he saw. "There's always next time. I'll help you clean up. We'll toss out whatever we have to."

"All right." Daniel got up and went to the kitchen and came back with a box of garbage bags. They picked up every empty chip bag and every pizza box and stuffed it in. There were receipts everywhere. Daniel laid them on the shelf below the TV.

And Kyle pulled down the movie posters. "Did you even like these movies in the first place?"

"I liked the one with Keanu Reeves in it. The rest were eh."

"Thought so." Kyle left the Keanu movie alone, but wadded the rest up and threw them in the bag.

With all that done, he pulled the foldaway bed from the couch and got the sheets from the closet. "All right, I think we're all set. You hungry?"

"I could eat," Daniel said. "I was just about to cook some pasta."

"Forget it. I'm taking you out. There's this new club a few blocks away by the beach I've been wanting to check out."

"The Palm Grove? I went there for lunch once."

"Then it's perfect," Kyle said. "By the time we're done, you'll forget all about her." As they headed out the front door of the lighthouse, Kyle looked up at the tower. "It'll probably be dark by the time we get back. You think it'll be okay?"

"It'll be fine," Daniel said. "It's on a timer." He'd stumbled into this job during college, and had never managed to snag a new one. And it was clearly not doing him any good.

"So I've been wondering," Kyle said. "Have you worked on your resume lately?"

Because Kyle had a bad feeling that as long as Daniel worked in that lighthouse, he'd always be looking for himself through someone else. And as long as he used women to define himself, he'd never become a man worth keeping. "Just crossed my mind." He could help Daniel work on a new one later on. For now, though, it was time for some fun. "Onward to the Palm Grove."