There may be more to this story than I had time to write in a week. It definitely does more to raise questions than to answer them. We shall see. I based Dr. Townsend on an old art history professor, who I believe passed away within the last few years. Hope you enjoy it! 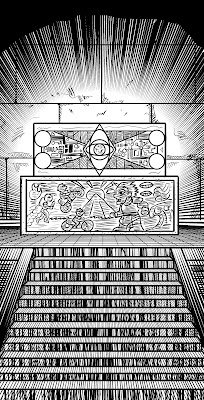 Dr. Townsend climbed down the rope and took the first steps inside the ruins. "Just think," he called up to the surface, "we're probably the first people to see this site in over ten thousand years!"

Ursula climbed down next, followed by Brad and Dermott. "Incredible," Ursula said. "So much of it is still intact."

Dermott helped Brad set up the lighting rig that they'd lowered in ahead of Dr. Townsend. They made the connections they needed and turned the lights on. The reliefs, the statues, the writing on the walls, all revealed themselves clear as day. Ursula immediately whipped out her camera and started taking pictures.

"Anything's possible," Dr. Townsend said. "The writing seems similar to cuneiform, but has features of Indus Script. And yet, the figures in these reliefs remind me more of Egypt, but with a hint of the Mayans. If we can translate any of this, it could add a whole new chapter to history."

Ursula halted before taking a picture of the southern wall. "Um, Dr. T? I think you should see this."

"Sure, what've you got?" Dr. Townsend jogged up beside her and gazed up at the relief. It was twelve feet tall, and depicted a giant with the head of a warthog. A smaller figure flew in front of it wielding a sword. "That is interesting."

"Look at that rig on his back." Brad pointed at the smaller figure, and the smoke shooting below him. "If I didn't know any better, I'd think that was..."

"Hm." Dr. Townsend pointed his flashlight at the smaller figure. "Are we sure those couldn't be wings? He could be some sort of divine figure vanquishing a primordial evil, or a hero granted a boon."

"I don't know about that." Ursula went over to the western wall. "Over here we've got somebody riding some eagles, and their wings don't look anything like the jetp... what that guy's wearing." She spotted something in the corner of the image. "Hang on. There he is again. And his jetpack's next to him."

"So either this society had higher levels of technology than we do now," Ursula said, "or they had the concept of science fiction."

"If we can decipher the writing, that would help narrow down the possibilities," Dermott said. "Wouldn't be the first time an ancient civilization had something that seemed high-tech in its artwork."

"Good to see some critical thinking," Dr. Townsend said. "Personally, I think this place is going to end up on Ancient Aliens no matter what we do, so let's just seek the truth, whatever it is. Ursula, you got plenty of pictures?"

"Just about every inch."

"Fantastic. What say we move on to the next room?"

They left through a pointed arch in the northeast corner. On the way, they kept their flashlights on the walls, where men fought with spears in one image and rode what looked like motorcycles in another. Yet another image showed a colossal city surrounded by a dome, where faceless soldiers tried and failed to invade.

A brick shifted under Dermott's foot. Suddenly, the entire hallway lit up as if there were fluorescent lights hidden in the masonry. "Okay, this is getting weird," Ursula said. "And I'm pretty sure that's a robot in that picture."

"Ancient artificial lighting," Dr. Townsend said in awe. "And it still works after all these years."

Brad said, "Have we considered that maybe somebody's trolling us?"

"Long way to go to play a joke on a bunch of grad students," Dermott said. "Guess it means we don't need these anymore." He turned off his flashlight and dropped it in his bag. Everyone else put theirs away as well and continued down the hall.

"As long as there are no death traps," Dermott said. "I mostly got into it because I think ancient Mesopotamia's cool."

Ursula continued snapping pictures. "Linguistics for me. And this is a pure treasure trove. They must have written on every brick."

"Maybe they explain why they're not mentioned in any other records."

"As far as we know," Brad said. "You guys hear something?"

A strange oscillating hum came from down the hall. They hurried on to the end and entered a vast chamber, lit by columns that hung from the ceiling like stalactites. A staircase took them down to the main floor. In the center, at the top of a raised platform with its own set of stairs, was a sarcophagus.

"Should we go up?" Ursula said.

Brad, Ursula, and Dermott all said, "Got it."

And they watched their mentor, adviser, and employer climb up the steps.

When he reached the first landing, a light flashed on the sarcophagus.

The lid rose up.

A decrepit figure lifted himself upright on thin, feeble arms. He wore a headdress of golden chains, and had tubes and wires sticking out of his neck and arms. The sight reminded Ursula too much of her grandfather when he was on life support. The man looked at Dr. Townsend. "You... have awakened me," he said with a hoarse voice.

Dr. Townsend stammered out a response. "I... You speak English."

The withered man nodded. "Then my ancestral tongue now exists. What year is this?"

"I see. Then his time has not yet come. You shall leave here now." The withered man started to lean back.

"Wait!" Dr. Townsend stepped closer to the sarcophagus. "What is this place? Who are you? How do you speak our language?"

"You are very impertinent." The withered man glared at Dr. Townsend, then down at Ursula, Brad, and Dermott. "Why have you disturbed me before my time?"

His voice seemed to reach right into Ursula and shake up her heart. "I... We... We're just archaeologists. We thought this was just ruins."

"We're just here to study," Brad said. "We had no idea you were here."

The withered man said, "Had you known of my rest, would you have come?"

Ursula, Brad, and Dermott all looked at each other, unable to offer an answer.

"Answer! You stand in the presence of Gorkol, last emperor of the Strimori. Your past and future depend on my awakening at precisely the right time!"

"Please, we don't mean any harm," Dr. Townsend said. "We've never heard of the Strimori. This tomb seems to be the only record of your culture left in existence. We just have a few questions, then we can leave you alone."

"More of that insolence," Gorkol hissed. "What is your name?"

"And you, down there! Your names!"

"I'm D-Dermott Jones. This is Bradley Arthur. And this is Ursula Patten."

"Ursula... Patten?" Emperor Gorkol waved at her. "Come up here."

Ursula hesitated, but then Dr. Townsend beckoned for her as well. "I think it's all right."

When she got to the top, she forced herself to look at his decayed face. His face had perhaps once been handsome, but now sagged as if barely even attached anymore. He had almost no hair, except for some patches on the sides. He blinked his reddened eyes. "Remarkable. To think I would meet you like this."

"No. Perhaps it's better that you don't. Very well. Each of you may ask me one question. Ursula Patten may ask me two." Emperor Gorkol looked at Dr. Townsend. "You may ask first."

Dr. Townsend coughed. "All right," he said. "Where did you learn English?"

"From my grandfather. I knew him as Akhormeth, he who led the Strimori to glory. He taught it to me and my siblings in private, telling me in his time it would be one of the most commonly-spoken. Only the imperial family knew this language. If the year is 2018, then he surely has yet to be born."

"Ah!" Emperor Gorkol raised his finger. "One question. You, down there!"

"Okay... If that didn't count as my question, then... Are you saying your grandfather was a time traveler?"

Emperor Gorkol gazed off into the distance. "I believe that was how he referred to it. Next."

Brad said, "So I guess he brought all this technology with him, whoever he was. Is there a way to decipher the writing?"

Emperor Gorkol nodded with a smile. "I learned your language. You should be able to learn mine. If the memory of my empire has been lost, perhaps it shall be your duty to restore it. Now, Ursula," he said. "Your first question."

"A-all right. You said our future depends on you awakening at 'exactly the right time.'"

"When I awaken again and my strength is restored," he said, "I am to be my grandfather's escort to Strimor, where he will ascend the throne. It was his inventions that defended us from the invaders from the south, the east, and the sky. "

Brad spoke up. "Hold up, did you just say the sky?"

"You have already asked your question!" Emperor Gorkol jabbed a finger at him. "Although... I must know, have the Ameshites returned from the clouds?"

"You will. Akhormeth battled them once. When they return, I will be ready to drive them back again. Ursula, you have one more question."

Emperor Gorkol lowered his head. "That question I cannot answer. You will one day find out on your own." He lay back in his sarcophagus. "On these walls you will find everything you need to know. The Ameshites will return. Akhormeth has witnessed their return. I must rest and prepare myself. You must rest and prepare yourselves."

"The walls will tell you everything." The lid of the sarcophagus closed over Emperor Gorkol, and any further answers from the last survivor of an ancient civilization.

Ursula took a photo of the sarcophagus. She'd nearly forgotten about the camera the entire time they were talking to the emperor.

"What say we head up topside?" Dr. Townsend said. "I think we've got more than enough to chew on for one night. Ursula, you all right?"

Dr. Townsend started off down the stairs, with Ursula close behind him. "I can't answer that. Although, I do feel safe in saying we're in scientifically uncharted territory across the board."

"But how can he hang that over my head like that? I'm never going to get that out of my head."

"He is an emperor." Brad led the way up the stairs to the hallway. "Didn't exactly seem terribly friendly to begin with."

"If there's anything I've learned in my career," Dr. Townsend said, "it's to be comfortable not having answers, even when you need them. I'm sorry about this, Ursula."

"It's all right," she said. "I just... I need some time to process this. It's not easy having a destiny you don't know about."

Ursula was the last to enter the corridor. She took one final look back at the sarcophagus, at the message from the past and the future that stopped short of reaching her. Somewhere in the carvings on these walls could be something else about her life to come.

Once everyone else had reached the entry chamber, Ursula tapped the glowing tile and shut off the lights.