A shorter one this time. Lately I've been a little busier at work than usual, and I have a novel draft in progress, so my writing schedule has been sort of out of whack. I've even had a few that, full disclosure, I didn't finish until early the next week. Shorter stories like this help me get back into the swing of things. Also a bit of an exception to the more science fiction/fantasy-oriented stories I've been doing since I restarted this project in July. Sometimes it's good to stay in the real world for a little bit. This coming weekend (Nov. 2-4), I'll be in Washington, D.C. attending Doxacon at St. Sophia's Orthodox Cathedral! Hope to see you there! 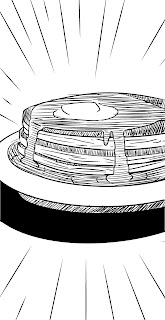 "So I have to admit," Sandra said with the smell of a cigar in her nose. "This isn't quite the venue I was expecting."

"I know, it's unorthodox," Roni, the bride-to-be, said. "But I've always had a soft spot for this place."

The place was an establishment called Bill's Billiards, just a few blocks away from the Interstate, right off Castille Street. Sandra didn't come to this part of town very often—certainly not in a long time. The residents here weren't exactly her usual clientele, which tended to have an extra digit or two in their salary. Roni herself lived in Verdure Heights—not the wealthiest, but definitely in the upper part of the middle. Sandra had planned wedding receptions at billiard clubs before, but those were usually not the types frequented by bikers, nor the types that had smoke hanging in the air at all times. Not to mention, Roni didn't just want the reception here—she wanted the wedding.

It was 3 PM on a Tuesday, and there were only three other people at the bar. One sat just a few seats down from Sandra. He had smoked three cigarettes since she and Roni arrived. All of his attention was on the Tennessee/Alabama game on the flatscreen behind the bar. The other two patrons were a couple of unshaven gentlemen playing 8-Ball at one of the tables.

"I'm just not sure this is really the type of place that would normally host a wedding," Sandra said. She sipped her Fat Tire, then waved at the bartender. "Excuse me, sir? Is it possible to reserve this place for special events?" She had to shout over the Thin Lizzy playing on the jukebox.

He shrugged. "Don't think we ever have. You have to ask Bill."

"Okay, Rocky. My friend here's getting married, and it turns out she wants to have the wedding here."

"I always said I wanted my big day to be unique," Roni said.

"I mean, it's your wedding. I just don't know that Bill would care much for the idea. I could see maybe the reception, or the bachelorette party. You do realize we don't allow kids in here, right?"

The Thin Lizzy song ended, and an Iron Maiden song replaced it.

"That's what I was wondering," Sandra said. "Roni, I'm not sure how people are going to feel about an adults-only wedding. I've never been to one."

"I didn't say I wanted it in here," Roni said. "You know that empty lot behind the place? We can set up back there, Bill's can provide some food, and if anyone wants to, they can come in here for some pool."

"Okay, so that makes a little more sense. Unorthodox, but I guess if you're comfortable with this place..."

"I am. I've been coming here since college. Bill's has always been great to me. And besides, I just cannot wait to see the looks on Mommy and Daddy's faces when they figure out where they are."

"Troll weddings. I don't get a lot of those." Sandra had seen pictures of Mommy and Daddy—the kinds of people who owned more than one car, and paid someone else to drive them. "Rocky, any chance we can work something out?"

"You'd have to ask Bill." Rocky looked toward the back of the building. "Don't think we've ever done catering. Speaking of which, you ready to order?"

"We'll both have the pancakes," Roni said.

"They're the best damn pancakes in town. Trust me, when you taste them, you'll want to have your wedding here, too."

"But this place isn't even open in the morning."

"No," Rocky said, "but we do get enough night owls who feel like breakfast when they show up here. And she's right, they are really good." Rocky scribbled down the order. "You'll still need to talk to Bill, though. I'm really not sure he'd go along with the wedding."

"I don't mind calling him," Sandra said. "In fact, I'm actually very interested in speaking with him. You see, my full name is Sandra Underhill."

Rocky whipped his head up and stared at her. "Underhill?"

"Am I supposed to know who that is?" Roni said.

"I'm surprised you don't, if you're a regular here," Sandra said. "Chester Underhill was my grandfather. He built this place."

"Chester's your grandfather?" Rocky said. "My God, he's a legend! Whatever happened to him?"

"Currently in Florida. Still has his old hog. My dad was even a bartender here, before the place got sold. I'm glad to see something's happening with it."

"I had no idea," the cigarette-smoking man said as he moved down to a closer stool. "I used to come here back when your pop was tending bar."

"So you think Bill might be willing to make an arrangement?" Sandra asked Rocky.

It was the smoking man who answered. "I think he might." The jukebox switched from Iron Maiden to Jethro Tull. "Bill McKenzie, at your service."

"I was wondering how long you were gonna take to say something," Roni said.

"Ah. Well, then, Mr. McKenzie," Sandra said, "if we can get the lot out back on March 15, and some light catering—I guess we'll want burgers, fries, wings, and those pancakes Roni was talking about—I'm pretty sure you'll be well compensated."

"We will spare no expense," Roni said.

"I think we can handle that," Bill said. "Rocky, their next drinks are on me. Tell Chester I said hi."

Sandra swallowed some more beer. "I just hope those pancakes are as good as Roni said. I'm going to want plenty of syrup."