Well, I'm back from Doxacon, and I had as good a time as my immune system would allow. I started developing a cold at the same time, so while I still went to the convention, I spent a lot of it lying down. I couldn't even stay through the Liturgy on Sunday. The sickness and travel also meant I didn't complete a new story last week. Bleh. Fortunately, I have a six-week buffer, so I should still be able to meet a weekly posting schedule for the time being. The prompt for this story was: 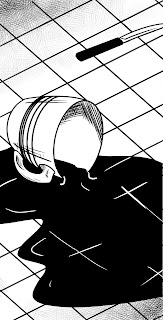 The fusion reactor had been running smoothly all night. Heat and output remained stable. Doctor Orton and her team had been using it to power the control room. One more day of successful power output, and the team could get to work on the paper and share their work with the world.

Doctor Orton stood on the observation deck, looking over the chamber. She was staying overnight to keep an eye on everything while the test proceeded. There was only a skeleton crew, with Dr. Jorowsky, Dr. Chau, and Dr. Haller, all running on coffee, the promise of celebratory pie in the morning, and the prospect of a place in history books. They were finally generating power through controlled nuclear fusion, one of the white whales of modern physics. Once this went into civilian use, it would revolutionize energy production around the world.

She could already taste that cherry pie.

Dr. Haller, once a graduate student of Doctor Orton, now a full member of the team, walked up with a fresh cup of coffee. "Here. Just brewed another pot."

"Appreciate it," Dr. Orton said. Black, just the way she liked it. "You not getting one?"

The cup was still hot, so Dr. Orton held onto it while it cooled down a little. The warmth soothed her in her 2-in-the-morning fatigue. "What are your plans for when we're done?"

"I'm taking a week off, running up to Virginia, seeing family."

"That sounds nice," Dr. Orton said. "I've still got to make sure the data is something resembling organized. But as soon as I'm done with that, I'm taking a little well-deserved vacation myself." She raised her coffee, but it was still too hot to sip. She gave it a sniff. "This smells a little funny."

"You sure?" Dr. Haller said. "Smelled fine to me when I poured it."

"You ever tried using a Keurig out of the box without scrubbing the insides? That weird plasticky smell that gets into the cup? It's a little like that."

"I hope something's not wrong with the coffee maker." Dr. Orton called down the stairwell to the lab, "Hey guys, is your coffee all right?"

Dr. Orton asked Dr. Haller, "Did you put anything in this?"

"It's just a question, and it's just a cup of coffee." Dr. Orton headed toward the stairs. "I'll just pour another cup."

As she turned, she found Dr. Haller right next to her, grabbing her sleeve, with a blank glare in her eyes and a small knife in her hand.

Dr. Orton threw the cup aside and twisted around, pulled Dr. Haller off balance, and steered her into the floor. She brought her knee down on Dr. Haller's shoulder to pin her down. The puddle of spilled coffee spread out from the cup.

Dr. Chau called up from the lab. "Something wrong up there?"

"We're fine," Dr. Orton said, then to her captive, "Andrea, what happened?"

"Just kill me. You might as well. Here's the knife, right here."

"You know perfectly well I'm not going to do that. You've always been a wonderful student, and an invaluable part of this team. Why throw all that out now? Who put you up to this?"

"If they find out... they'll kill my brother and sister."

"The people who paid me to—"

"No, I mean, what brother and sister? Andrea Haller is an only child."

The young woman stopped crying as if on cue. "I guess you got me there. But when did you really figure it out? It had to be before I gave you the coffee. Arsenic's supposed to be odorless."

"Well, for one thing, unlike you, Dr. Haller knows perfectly well that I'm a Shodan in Aikijujutsu. But it was earlier, when Chau connected the reactor to the lab, when you helped make the final connections. You looked at the cords like you'd never seen them before. Andrea Haller helped design the electrical system for this lab. I couldn't tell the difference otherwise."

"It's a miracle what they can do with surgery these days," the assassin said.

"Oh, she's safe. Thinks you gave her the night off."

"And who are you working for?" Dr. Orton said. "CIA? Russia? Exxon Mobil?"

"The important thing is, they paid well. More than enough to make the new face worth it. The question is, what are you going to do with me?"

"Well, I'm not going to kill you," Dr. Orton said. "I wouldn't want to have to explain to the others why I murdered Dr. Haller, or why she'd suddenly turn up alive the next day." She peeled the assassin's fingers off the knife, and threw it to the other side of the room. "How about this? You go home. I tell the guys you needed to get some rest. And then, I dunno, I'll treat myself to some pie."

"You think you're some badass, don't you?"

"You're the assassin. You tell me."

"What do you think is going to happen to me when they find out I failed?"

"I wouldn't know. I've never been hired to assassinate somebody."

The assassin gritted her teeth. "Ah, hell. I got half the money anyway. Let me go. I'll leave."

Dr. Orton eased off. They both rose from the floor. She led the fake Dr. Haller through the lab, where Drs. Chau and Jorowsky had their eyes alternately on their data readouts or the movies playing on their tablets. "I'm getting some pie a little early. Anybody want some?"

Dr. Chau said, "I may grab some in a little bit. But thanks."

Dr. Orton continued on to the break room, took the box out of the fridge, and cut out a slice. "Want one?" she asked the assassin.

"I insist." Dr. Orton cut out another slice and slid it into a baggie. "For the road."

The assassin glared at the pie for a moment, then swiped it out of Dr. Orton's hand.

"I believe you know the way out."

While she ate, she called Dr. Haller at her home to make sure she was all right—she was—and called the police to tell them a woman matching Dr. Haller's description was leaving the lab.