Lately I've noticed some patterns emerging in my writing. For example, this story involves a hyperdrive and a ship's engine room, which also turns up in a novel draft I have lurking in my hard drive. The sci-fi concept here also has a previous owner, as in "No Different From Anyone Else." Maybe think of it as "conceptual continuity," as Frank Zappa would have put it. This is another story where the "keyword" prompt never found a place in the story, so you'll find it crossed out below. 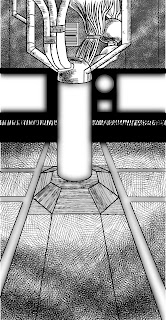 The yacht was just what Armie Stonehouse needed. Everything the salesman showed him confirmed what he already knew when he first saw it: the upper deck with the pool and jacuzzi; the open-air lounge and dining room; the spacious and luxurious bedrooms. Armie couldn't imagine a better place for a party, for any occasion.

"All that's left," the salesman said, "is the engine room, if you're interested."

"Of course I am," Armie said. "I used to work in the engine room back in the Navy, so I'd love to see what's running this boat."

"Lead the way." The salesman took him down the stairs from the living room. As they descended deeper, the boat hummed more intensely.

The stairs stopped in a plain white room with a reinforced steel door. The salesman took out a set of keys. "So you're Armie, and you were in the Navy."

The salesman jiggled the key until it turned, and opened the door for Armie.

Armie froze at the threshold.

"What is that?" Armie pointed at the giant glowing tube embedded in the floor. Various tubes and wires stuck out of it, attaching to large boxes with oscillating lights in their corners. On the opposite end of the room was the control panel, but it didn't look anything like what Armie had used in the Navy. "Seriously, what is that?"

"That would be the hyperdrive cavity," the salesman said.

"…drive cavity." The salesman stayed behind Armie. "The previous owner was very… experimental."

"I'll say." Armie stepped in for a closer look. Inside the tube, the machinery pulsated with tiny lights. The text in the gauges used characters he didn't even recognize. He couldn't begin to guess what most of these switches and buttons were supposed to do. "And what is a…"

"Right. What is a hyperdrive cavity supposed to do?"

"How's that even possible?" Armie said. "What would I even need with faster-than-light travel?"

"Just imagine. You're out on the open sea. All your guests are having the time of their lives, but you're thinking, how can I make this even better? Well, you can just rev this baby up and… zip! You're in London in less time than it'll take to run upstairs."

"London?" Armie spotted a map on the control panel. "Isn't it kind of far inland? And wouldn't we have, you know, Wales in the way? How do we maneuver at… you said faster than light speeds?"

"Yes. Anyway, maneuvering might be a problem, if you were traveling by water. But this travels on space itself. Set things up right, and you can go anywhere in the world in an instant."

Armie brushed his finger on some of the buttons. "Does it work?"

The salesman laughed. "Does it work." He leaned on one of the large boxes. "Why don't we take her for a test drive?"

"Seriously? We don't even have a crew. No way this boat takes only two people to run. And aren't there preparations—"

"Again, that may be true for the sea. But the hyperdrive's a different story. Just use that map to set the coordinates."

Armie touched Great Britain on the map. It zoomed in, and Armie zoomed in further by touching London. The map showed red and yellow and orange dots and lines that Armie took to be ship locations. He touched an empty spot on the Thames. A crosshair appeared on that spot.

The salesman stepped up beside him. "And now we just press this button…" He pointed at a blinking blue light, and brought his finger down.

The hum around them grew louder. The light in the cavity shifted from bright white to red. The hum became a loud buzz, then a scream. The scream faded after only a second, and all became quiet. The cavity returned to its original color.

"Shall we go up and take a look?" the salesman said.

They headed upstairs to the top deck. It was raining, but from here Armie could see the Tower Bridge and the Shard. "Im… pressive."

"How's this even possible? Where did you even get technology like this? What's it doing on a yacht of all things? Shouldn't NASA know about this?"

"I make it a policy not to ask too many questions about the previous owners. I will tell you that he had some circuits and diodes next to his left eye. Didn't exactly seem like a local. Of course, we're not exactly locals here, either."

"Well, I think I've seen all I need to see. This is exactly the boat I want."

"You sure?" the salesman said. "You don't have any further questions?"

Armie gazed over at the Tower of London. He'd been meaning to come back here for years. Now it looked like it would be a lot easier. Hopefully there wouldn't be any issues with customs. "No questions. I just hope I can find someone who can figure out that engine room."

"I might be able to put you in touch with somebody. Now let's head back to my office to work out the fine print. You stay up here and enjoy the sights, I'll take care of the hyperdrive."

The salesman headed back downstairs while Armie sat down on one of the sofas next to the pool. From here he could see tourists and Londoners gathering by the banks of the Thames to see the boat that had appeared in the water out of nowhere. He wondered what he would think if he'd seen this from their point of view. Would he assume it was real? Or part of a movie someone was shooting? Maybe the first sign of an alien invasion? It was a wonder he himself hadn't heard of anything like this until now.

He waved at the people on the shore.

The boat began to shake. At first he thought it was simply the hyperdrive getting ready to take him back home. But everything was stable the last time they used it. Armie had to brace himself on a rail just to stay upright in his seat.

The salesman came running back up the stairs. "Abandon ship."

"My finger slipped. We have to get off the ship, now."

They headed down to the main deck. "I don't understand," Armie said. "What you mean your finger slipped?"

"I'm saying I pushed the wrong button, some alarms went off, and I couldn't find a way to shut it off." They reached the stern, where the salesman picked up a large case and tossed it overboard. As soon as the case opened and the raft inflated, Armie and the salesman jumped out of the yacht and swam to the raft. The salesman disconnected the tether and let the raft drift away.

The yacht cracked, buckled, and crumpled into itself like a piece of paper being wadded up. Then that wad shrank into oblivion.

"You swear that was an accident?" Armie said.

"Honestly? You think I'd cut my own throat like that?"

"So you really expect me to believe your finger slipped?"

"Okay, fine. More like I tripped and hit about five of the wrong buttons at once. My fault. Now what? I don't even have a passport."

Armie glared at the salesman, the man who'd stranded him here on the other side of the Atlantic when all Armie had wanted to do was buy a boat. Armie didn't have his passport, either. He'd have to make a lot of phonecalls once he got to the American embassy.

If nothing else, Armie did want to see London. "We'll figure something out."