I was having a similarly busy week when I wrote this next story, so I made it shorter to get it done on time. As you can see, I didn't even come up with names for the characters. The prompt was:

Sometimes they write themselves. 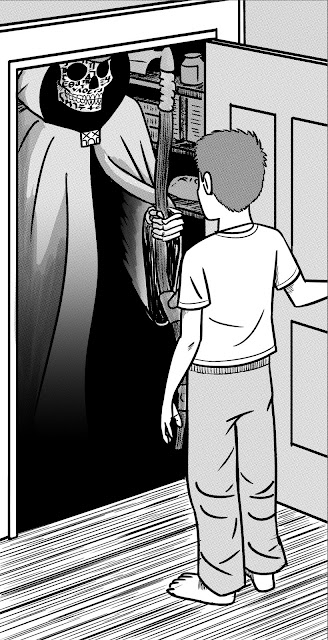 It was late at night, and I felt like a snack. As soon as I opened the door to the pantry, I let out a long, piercing scream. A figure in a black cloak stood inside, holding a scythe. Under the hood was a polished, yellowed skull with ancient symbols carved into the bone. The figure stepped—or rather, hovered—through the door and raised the scythe. I screamed again.

The reaper halted with the scythe still above his head. I couldn't figure out how he'd managed to fit that in such a cramped pantry. "Wait," he said. "You can see me?"

"You're not supposed to see me," the reaper said, his voice a deep, primordial rumble. "This can't be right." He lowered his weapon and looked back into the pantry. "I thought this was…"

I screamed again, and backed up against the kitchen counter.

"Stop that," the reaper said. "Do I have the right address or not?"

Finally the right synapse fired, and I realized the reaper hadn't killed me yet. I tried to steady my breathing. At first I wondered if this was some demented prank by some psychopath in a Grim Reaper costume, but no, that was a skeleton under that cloak, and its bones were moving on their own. And I'd never heard anything like that voice. If a bottomless pit could talk, that was what it would sound like.

The reaper pounded the handle of his scythe on the floor. "I'm at the wrong house," he said. "That's twice in one century. I'm getting sloppy. I'm sorry to trouble you, Mr. F_____. Is there anything I can do for you before I go?"

"Appearances aside, I am an angel. Was there something you needed in the pantry?"

"Touché." The reaper set the scythe against the wall, entered the pantry, and came out holding a box of blueberry Pop Tarts. He laid it on the counter and picked his scythe back up. "Enjoy your snack, Mr. F_____. Until next time."

"Even I don't know that. And if I did, I wouldn't tell you." The reaper gripped the handle with both hands. "I just know it is not this night. Farewell."

The reaper faded to black, and the black faded out of sight, until I was once again alone in my kitchen. Somewhere, an unlucky Mr. D_____ at 350 Edgecrest Drive was probably already having an unfortunate encounter in his own pantry. Outside the night was as black as the reaper's cloak.

I gobbled up the Pop Tarts without heating them, and never slept a wink that entire night.