Another shorter one this time. I definitely had a more hectic time at work during the first week of December, and had trouble getting to my writing when I was at home. So here's a goofy little story about aliens! 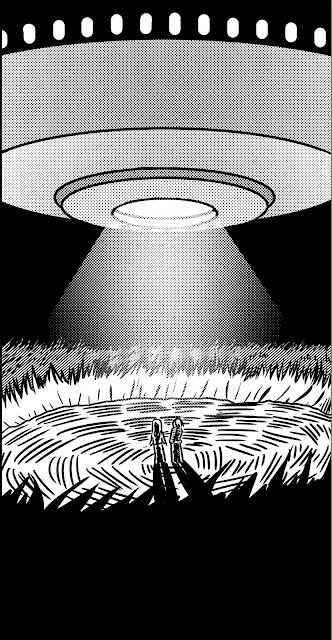 The crop circle was just supposed to be a joke. Sarah had persuaded Rhett to come out to this wheat field in the middle of a cold Autumn night on the promise that building their own circle would summon the aliens that were secretly spying on Earth. All they really needed were some small wooden planks to press the wheat stalks down with their feet, and some rope to hold onto the board. Sarah mostly wanted to see how long she could keep him revved up about aliens, like Linus over the Great Pumpkin, before she revealed it was all a hoax. Participating in a little vandalism on a school night was just a nice bonus for her.

Then the flying saucer showed up, floating down as they headed back to her car. It hovered over their crop circle for a moment, then shone a light directly at the two of them.

Three figures materialized with a blue glow below the ship. They were gray, with black eyes and elongated arms and legs, like the classic greys of urban legends. The alien in front pointed over his shoulder, toward the crop circle. "Did you do this?" he said.

Sarah could only stammer in response.

"We both did," Rhett said. "Thank you for answering so quickly!" He fell down on one knee. "I'm at your service."

The leader of the aliens turned back to the other two and whispered with them for a moment, before saying to Rhett and Sarah, "You really call this a crop circle?"

"The edges are jagged," one alien said.

"The shape is off-kilter," another alien said.

The leader said, "Our circles are made with specific codes to communicate vital info from our scouts. We were worried that this time they had consumed too many of this planet's recreational substances before coming. But you're just locals playing a prank. You've wasted our time."

The aliens vanished, and the flying saucer drifted away, leaving Sarah and Rhett with only their flashlights. They continued on toward Sarah's car. "Not what you expected, huh?" Sarah said, still shaking a little from what she had just seen.

"Everybody's a critic," Rhett said. "I told you we should have drawn it out first."

Meanwhile, the three aliens on the flying saucer were laughing—or whatever their equivalent was—over the looks on those Earthlings' faces. Scaring humans never got old.