Happy New Year! We're now halfway through the project, and so far so good: I only missed one week of writing, and I haven't missed a week of posting. This time, just a little goof-off of a story. Enjoy! 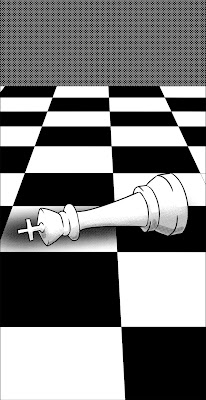 Sergio searched the board, but couldn't find any way out. His only defenses were the bishop and rook, and neither of them could move without getting captured. He reached across the table and shook Mikhail's hand. "Good game."

"Good game," Mikhail said, raising his shot of rum. Sergio raised his, and they tapped the glasses together in a toast, and downed the drinks, and shuddered.

"Nah, I think I'm ready to check in." Mikhail started gathering up the pieces off of the board. "Same time tomorrow?"

"Sure thing." Sergio got up and headed out of the dining tent into the bitter Arctic air. It was ten PM and the sun was still shining over the rocky coast. He'd been here five weeks, and was scheduled to fly back to Anchorage in another five days. He and Mikhail and the twelve other people at this camp had been gathering and studying microbe samples from the ocean. Every night, he and Mikhail had played chess to unwind.

And every few nights or so, Sergio let Mikhail win.

Sergio had been the champion of his high school chess club. He had enough trophies at his mom's house to show he was no slouch at the game. Sure, he liked having an enthusiastic partner at this relatively isolated campsite. Hardly any of the other technicians and grad students seemed interested, but Sergio hardly had to lay out his board before Mikhail sat down asking to play. It's just that Mikhail was so lousy. He would move a bishop when he needed to move a knight, or send a queen forward when diagonal was so obviously the best move. Sergio had to make similar moves just to keep Mikhail from losing too easily.

Sergio never had the heart to say anything.

Which wasn't to say that Mikhail wasn't improving. Sergio had to make fewer adjustments in this last game. This was the closest it had felt to Mikhail winning fair and square.

Still, Sergio looked forward to getting back home and playing with more serious chess players.

He slipped into the tent he shared with three other researchers. After nearly six weeks, he still had trouble remembering their names. None of them were really the type to make idle conversation. As it was, Sergio mostly counted the days to when he could return home and focus on compiling data in a warm apartment where night could actually fall in the middle of summer.

Sergio took off his coat and thermal pants, dropped into his bunk, and started to sleep.

But then he heard Mikhail's voice come in from outside the tent. "Sergio, you awake?"

"Can you come outside for a minute? I want to ask you something."

Sergio got up and put his thermal clothing back on, then unzipped the tent entrance and braced against the cold air. After zipping the flap back up, he went with Mikhail toward the shore.

"Something's been bothering me about that game you just played," Mikhail said. "Did you let me win?"

Sergio shook with a jolt. "Why do you say that?"

"It's mostly just little things I can't put my finger on." Mikhail picked up a pebble and threw it into the sea. "But what got me was when you had that knight in exactly the right position to take my bishop. And then you put it right in the bishop's path. It was just so obviously wrong."

It was obviously wrong, which was why Sergio had hesitated before doing it. If Sergio had taken the bishop, Mikhail might never have recovered. But all he did was give himself away.

"It's true, isn't it?" Mikhail said. "I figured you're not that stupid, but what about me? I know I'm not that good at chess, but I'm a grown man. I know how to take a loss."

"Thank you," Mikhail said. "How about a rematch? I want to see what you can really do."

"Do we have to?" Sergio rubbed his eyes. "I'm completely exhausted."

"You're on." Sergio shook hands with Mikhail, then the two of them went back to their own tents to go to sleep.

They met up the next morning during breakfast and started the game as soon as they were done eating.

It was no contest at all.

"N-No way," Mikhail said, scanning the board, retracing his steps. He had lost his queen early on, and his rooks and a bishop after that. Now his king was trapped between Sergio's queen and rook. "Merciless."

"You see why I don't like winning that way?" Sergio said.

"You could have done that from the very beginning," Mikhail said. "I would have left you alone."

"But I like hanging out with you. And besides, who else would I play chess with?"