Ooh, this is a special one. It's loosely based on a painting by my mother, Julia Morgan-Scott, called "Naughty Naughty." The original was sold at Dragon Con back in the 90's, but we still have prints of it. Here's the painting right here: 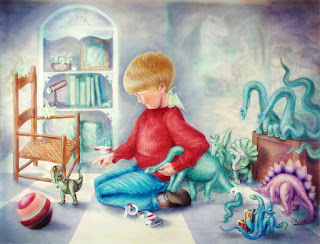 That's me in the red sweater. I still have some vague memories of posing for this, though my mom didn't actually paint the picture for some time. When the prompt came up for this week's story, this painting was what came to mind.

Principal Timothy Haller entered the teacher's lounge for a cup of coffee, and found Ms. Simone Ulrich, one of the kindergarten teachers, on the floor. She was down on her hands and knees peering under a desk in the corner. "Is there a problem?" Mr. Haller said.

"Sure. You lost something?"

"I had to confiscate a box full of dinosaur toys from one of my kids this morning, and I lost the tyrannosaurus."

"All right." Mr. Haller knelt beside the couch and lifted the flap. He found a plastic fork and an old magazine, but no dinosaur. "Why'd you confiscate them?"

"Too noisy?" Mr. Haller said. "I'll bet the kid couldn't leave them alone. You know how children are about dinosaurs." In all his years since childhood and since becoming an educator, one thing had never changed, and that was children's fascination with dinosaurs.

Ms. Ulrich got to her feet. "No, that wasn't it. How do I put this…" She crawled across the room to a bookshelf with a gap at the bottom. "They moved."

"No. They… You're not going to believe this. They're..." She moved her hands as if trying to grasp for a different word. "Alive."

"They're plastic, but they're alive. Living miniature toy dinosaurs, all in a box. He let them out during show-and-tell, and I didn't want wild animals running loose in my classroom. I brought them in here for safekeeping when I took the kids to lunch, but then the T-rex got loose."

"Where are the rest of them?" Mr. Haller said.

"Over there, on the desk." She pointed to the cardboard box sitting next to the computer.

Mr. Haller opened the lid. He saw a triceratops, a pterodactyl, a pachycephalosaurus, a stegosaurus, and a brontosaurus, and conspicuously, no tyrannosaurus. They were also very conspicuously still. "These are just regular toys."

Mr. Haller took the triceratops out of the box. "Just a plain, ordinary, plastic toy dinosaur, just like what I had when I was a kid. It's not moving at all." His old dinosaur toys hadn't been quite so naturalistic, but then he did grow up in the days before Jurassic Park.

"That's impossible," Ms. Ulrich said. "They were walking around and interacting with each other. The T-rex even bit the brontosaurus."

"I imagine that's why it has the bandage on the tail."

"Yeah, I had a few kids cry over it. The boy who brought them gave the T-rex quite the talking-to. And muzzled it. But why aren't they moving?"

"Because they're just regular toys."

"No! They're alive. Just take a look!" Ms. Ulrich got out her phone and pulled up a video. It showed her classroom, with the kids sitting on the floor in a circle, around the same dinosaur toys Mr. Haller was holding in the box.

This time, they were moving.

The dinosaurs padded around among the kids, taking a closer look at them, as if trying to determine whether they were potential predators. Some of them let out squeals that were probably more imposing at full size. The T-rex snapped at one girl, and a boy shouted "No!" The T-rex jerked its head back and skulked away. It seemed to know who was the boss around here.

It passed by the triceratops, which yelled at it, and the stegosaurus, which swung its tail at it. It then managed to sneak up on the brontosaurus, which plodded across the floor, its tail swaying side-to-side. The T-rex opened its mouth and caught the tail in its jaws.

Then the screams started. That same little boy shouted "No! Bad rex! Very bad rex!" He jumped into the circle and pinned down the T-rex as the camera swung away and went still.

"That's when I went to grab some bandages," Ms. Ulrich said. "Crazy thing was, even when they were moving, they still felt like plastic. I don't know how he did it. I'm not sure I want to know."

The box began to rattle.

"Yeah, you can't fool us anymore," Ms. Ulrich shouted. "Now, you gonna help me look for the T-rex or not?"

He checked under the other couch, but still didn't find anything that resembled a tyrannosaurus toy. With any luck, it hadn't escaped to the halls yet.

Something darted past in the corner of his eye. "What was that?"

"There it is!" Ms. Ulrich jabbed her finger toward the door. A small red lizard was running in front, its tiny arms dangling underneath it, its monstrous jaws open wide. "It got the muzzle off!"

Mr. Haller dove after it, arms forward, but it leapt aside, ran toward Ms. Ulrich, then veered for the bookcase. The little thing was quick as a bird. It was like his uncle's backyard chicken coop all over again. Mr. Haller refused to go near it as a child because of an especially aggressive rooster that acted up whenever it saw him. And that rooster didn't have the bite of one of Planet Earth's deadliest killing machines.

Now that he thought about it, weren't tyrannosaurs supposed to be distantly related to chickens?

Ms. Ulrich picked up a small trash can, made of steel mesh. She dumped out all the old papers inside, and jumped at the T-rex. It leapt out of the way just as she brought the can down. It roared, or rather squealed, and dashed for the door. Mr. Haller grabbed the trash can. He was all set to make his own attempt, when Mr. Hovard, one of the first grade teachers, opened the door.

"No!" Mr. Haller watched the T-rex run between Mr. Hovard's feet, out to the hall. "Out of the way!" He shoved Mr. Hovard aside.

"Ask Simone!" Mr. Haller saw the T-rex make a beeline toward the cafeteria. Yet now Mr. Haller had the advantage. The floor was wide open. Hardly anyone was walking around. The T-rex had no place to hide.

Mr. Haller launched himself forward and swung the trash can down to the floor, right over the tyrannosaurus. "Gotcha!"

"Thank goodness!" Ms. Ulrich said as she caught up with him. "But how do we get it out?"

"Hm." Mr. Haller watched the T-rex ram itself against the mesh of the trash can and try to gnaw on it. It screeched and jumped and kicked, scratching the metal with its claws, so much like an angry rooster. "That's a very good question."

A small boy came running up with tears in his eyes. Ms. Ulrich said, "Sam, what are you doing out of the lunchroom?"

"I—" He sniffed. "I just want my dinosaurs back, Ms. Ulrich. I promise they won't hurt anybody." He squatted, looked into the trash can, and asked the T-rex, "Have you been bad again?"

"No. He just ran off. These are some remarkable toys you have here."

"Thank you, Mr. Haller. Can I have my dinosaurs back? I'll put them somewhere safe and I won't bring them to school ever again."

"Can you get this guy to sit still?" Mr. Haller said, as Ms. Ulrich ran back to the teacher's lounge.

All the noise and motion inside the trash can stopped. Mr. Haller looked through the mesh, and saw a plastic toy tyrannosaurus tilted over and leaning on the inside of the can. He picked the can up. "All right. He's all yours."

Sam picked up the T-rex with the most tender care. "Where are the others?"

"They're right here." Ms. Ulrich returned with the box. All the other dinosaurs were lying still just like the T-rex. Sam placed the T-rex among them. Mr. Haller watched them in case they all tried to shift away from it, but they remained unmoving plastic.

"Eh, it's all right," Mr. Haller said. "Everything worked out in the end."

"But I told my mom a lie. She's gonna be mad at me. I told her I was bringing my Transformers."

Mr. Haller bristled at the thought of what that could bring to his hallways and classrooms. "Next time, why don't you just bring one toy, okay?"

"Here, let's get back to the lunchroom," Ms. Ulrich said, directing him away from Mr. Haller and the upturned trash can.

Mr. Haller stayed seated on the floor, his elbow propped on the bottom of the trash can, with Mr. Hovard still in the doorway behind him. The dinosaurs were out of sight, where Mr. Haller didn't have to think about them or wonder what could have made all that possible. There was the power of imagination, and then there was whatever he'd just seen. "All I wanted was some coffee," Mr. Haller said. "I didn't just dream that, did I?"

"Don't ask me," Mr. Hovard said. "You're the one who was chasing a dinosaur toy." He turned back to the teacher's lounge. "Guess I've got my work cut out for me next year."