So over the last few years, they introduced a son for Superman. I've read some of the comics, and I think it's the most relateable the Man of Steel's been in ages. They didn't need to make him Jesus or gritty or angsty; they just had to make him a dad. So when this prompt came up, I wound up developing a pastiche of Superman and the new Superboy, while also drawing on all the time I used to spend at the coffee shop. 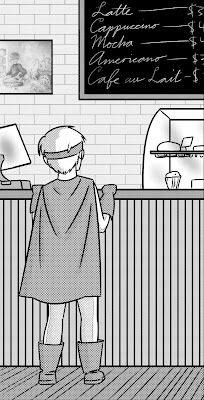 The boy seemed to have appeared at the counter out of nowhere. Cathy had been steaming a cappuccino, and hadn't heard the doorbell over the grinding noise. He seemed to be about ten or eleven, and was catching his breath. He wore a silver shirt with a blue mask that matched his cape and gloves, just like the local superhero Whirlwind. Nobody else was with him. The only other people in the coffee shop were the middle-aged woman who had ordered the cappucino, and Brad, who was sitting in the corner with his laptop and textbooks.

Cathy gave the woman her cappuccino and met the boy at the counter. "How can I help you?"

"Um, yeah, I need a…" The boy adjusted his cape, pulled a piece of paper out of his pocket, and read the note. "One frappucino with whipped cream, and one decaf mocha."

"And a name for the order?"

"Huh? Oh, yeah. You could say that." "Gust" laid a ten dollar bill on the counter. "My dad said that would be enough. He'll be here in a minute."

"Okay, I was wondering." Cathy rang up the order and gave him his change. "Should be ready by the time he gets here. You know, I'm a big fan of Whirlwind, too. He got my sister out of a really bad wreck once."

"Cool." The boy sat down on the couch, on the opposite end from Brad, whose headphones kept him from noticing much.

Cathy got to work on "Gust's" order. A lot of people in this town owed Whirlwind a great deal, Cathy especially. If he hadn't delivered Stacey to the hospital when he did, she might not be around today. Rumor around town had it he used to be an EMT before becoming a superhero—Stacey had certainly made him seem like a pro. It didn't hurt that he helped take care of creeps like Dr. Stormbolt whenever they turned up.

Cathy just hoped this boy's father got here soon. She was a barista, not a babysitter, and she hadn't been one since she graduated from high school a few years ago. Some parents let their precious little darlings run wild, as if she didn't already have enough to deal with around here. But so far this "Gust" seemed like a nice enough kid. Wasn't getting into people's business or making a lot of noise—at least, nothing she could hear over the steamer or the blender.

When she was done, she called out "Gust's" name and carried his drinks to the counter, but he didn't come up to get them. The boy was sitting on the couch, watching something on Brad's laptop.

"Oh, right!" Gust ran up to the counter, snatched the cups, and took them straight back to the couch to resume watching. Then as an afterthought, he said, "Thank you!" and sipped the frappuccino.

"He's not bothering you, is he?" Cathy said.

"No, we're cool." Brad pointed at his laptop. "It's Whirlwind. He's in a fight across the river. Somebody's livestreaming it right now."

The boy was staring intently at the screen, shaking his fist. "Come on… You can do it…"

"Thought he'd like to watch his hero in action," Brad said.

The woman with the cappuccino opened the door, but then stepped back in. "You can see it from here!"

Cathy left the counter and ran out the door. "You're right!" They were only dark specks in the sky, like a pair of squabbling birds, but the force of Whirlwind's punches was unmistakable. So were the energy blasts coming from his opponent. Whirlwind dodged each one, but sometimes just barely.

"Geez," Cathy said, "feels like every week there's a new guy trying to take him down."

The woman wasn't listening; she had started recording the fight on her phone.

Cathy went back inside and joined Brad and Gust at the laptop. It did give a better view. It looked like it was being recorded from the roof a nearby building, so it was more level with the two combatants. Whoever Whirlwind was fighting had a red crest on his head, and the blasts came from his giant chrome-plated gloves. He was flying thanks to jet engines in his boots.

The supervillain fired another blast. The camera shook, turning everything into a pixelated blur. Gust said, "Hold still! Come on, what's happening?" He then muttered something that sounded like, "I should be there."

When the camera finally settled, it showed Whirlwind with smoke wafting off his shoulder. Gust let out a wail, his hands clawed tight on his frappuccino cup.

"I swear," Brad said, "half these guys aren't even stealing anything or trying to take over the world. They're just trying to prove they're the bigger alpha."

"I agree," Gust said. "Except this guy. I think he stole some tech from the power plant."

"Sure, that's a nice theory. I guess we'll find out when this is all—"

Gust screamed again, this time jumping to his feet. One of the supervillain's energy shots struck Whirlwind right in the arm. He sank down in the air, but didn't fall. The villain had his back to the camera.

"What's he even using to power that thing?" Cathy said.

"If I had to guess…" Brad pointed at the villain's back. "It's this bundle here on his belt. Those stripes on his costume might have cables and circuits for the gloves and boots."

"You think so, huh?" Gust had taken a flip phone out of his pocket. Cathy didn't even realize they still made those. His dad must have thought he was too young for a smartphone. Gust clicked out a text message, and as soon as he sent it, he fixed his eyes back on the screen.

Brad furrowed his brows. "Is Whirlwind checking his phone?"

Cathy stared back at Gust. His teeth were clenched, his eyes on the screen, his fist wrapped tight around his phone.

On the screen, Whirlwind lunged forward, and after grappling with the villain, managed to grab hold of his belt. After a few attempts to pull it off, he slipped behind, and crushed the bundle on the villain's back like an aluminum can.

The villain began to fall, but Whirlwind immediately caught him.

"YES!" Gust jumped with his fists in the air. The cap came off his frappuccino, scattering shaved ice on the floor, the table, and on Brad's shoulder. "Oops, sorry. I'll clean it up."

"It's okay, don't worry," Cathy said. She noticed Brad staring at Gust, and knew they both had the same thing on their minds. "That… That was you texting him, wasn't it?"

"He went for the belt almost as soon as I said it," Brad said.

The boy's face turned red. "Well… I did say Dad was busy."

The screen showed the red-crested villain sitting on top of a police car, his equipment now useless. Whirlwind was flying offscreen.

The middle aged woman burst in. "He's coming this way!"

And before anyone knew it, a masked man in blue and silver dropped from the sky, landing on his feet, his arms still giving off a little smoke. He opened the door, ringing the bell.

"Dad!" The boy ran to Whirlwind and threw himself into a hug.

"I saw the whole thing!" Gust said, pointing at Brad. "He's the one who thought of the belt!"

"All right then," Whirlwind said, and came over to shake Brad's hand. "I owe you one."

"N-No problem," Brad said. "It was just easier to see on the livestream."

Whirlwind saw the bits of the frappuccino on the couch. "I hope my boy didn't cause any trouble…" He read Cathy's name tag. "Cathy."

"Figured it was about time to start showing him the ropes, now that his powers are coming in." Whirlwind looked down at his son. "Did you remember to leave a tip?"

"D'oh." Gust slapped his forehead, zipped to the counter, and threw his change in the jar. "I knew I forgot something." He came back with some napkins and started wiping the slush off the table.

"Let me heat this up for you." Cathy picked up the mocha. "It's probably lukewarm by now."

She took the cup behind the counter, removed the lid, and ran the steamer through it. When she handed it back, she said, "You know, some time back you saved my sister from a car wreck. I've always wanted a chance to properly thank you."

Whirlwind lowered his head. "You're too kind. How is she?"

"Ah, same grade as you, Gust." He patted the boy on the shoulder. "Well, we'd better get going. Have a great day. Tell your sister I said hello."

"Stacey." A look of recognition crossed his face. "I do remember… She was clutching a little plush rabbit for dear life. Wouldn't go anywhere without it. So terrified…"

"She still has it," Cathy said, her throat tightening. "Not in the best shape anymore, but she keeps it on her windowsill." All this time, and he still remembered…

"I had no way to follow up after I dropped her off at the ER," Whirlwind said, "so I've often wondered how she was doing… whether she pulled through. Tell Stacey I'm glad she's all right. I'll have to come back here sometime. See you around, Cathy."

"Looking forward to it. And see you around, Gust."

"Later," Gust said, and sipped some more of his frappuccino.

Cathy waved as Whirlwind and his son Gust walked out the door.

The two jumped in the air, and kept going up.

Cathy couldn't believe it, either. "Wait till I tell Stacey," she said. "He remembers her."