Weekly Story #30: The Fool in the Falls

This is somewhat of a special story for a number of reasons. As far as this weekly story project goes, this is my first overtly religious story, for one. It draws on a very particular figure in Orthodox Christianity: the Fool for Christ, who feigns madness in order to squelch their pride and/or conceal their piety from others. Notable examples include St. Basil of Moscow (who is said to have told off Ivan the Terrible in person), St. Xenia of Petersburg (who dressed as her late husband and gave his name as her own), and St. Andrew of Constantinople (who received a vision of the Virgin Mary). "Crazy Steve" is definitely intended to be part of this tradition. It's also the last story of this project that will use my improv prompts. From here on, the stories will be created with a different method. Frankly, I'm amazed I kept that up so long. In some ways I feel like I'm a little out of my depth with the subject matter—both Holy Fools and domestic violence—but I figure it's worth a try anyway. The prompt:

THE FOOL IN THE FALLS 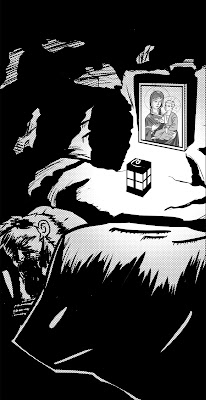 Pete was supposed to be in his bedroom. His father had no idea about Roberta, or the waterfall where she suggested meeting up. Pete always risked a lot by sneaking out. Dad had fists like a sledgehammer. Pete had called out sick from school more than once so no one would see his bruises.

He slipped out at dusk and arrived at the waterfall first, with only the dimmest haze of sunlight overhead. It was a short hike from the house, downhill from the pharmacy, about twenty feet from the top of the bluff. There was a road that curved past the bottom of the falls nearby, but hardly anyone ever used it.

As far as Pete knew, Dad also had no idea about the cave behind the waterfall.

"Pete," Roberta whispered from behind, tapping his shoulder. Pete turned around, and she greeted him with a kiss, deep and warm. "Sorry I'm late," she said. "My sister wouldn't leave me alone."

"No problems with your dad?"

"Not yet. He's usually drunk in front of the TV this time of night. As long as he stays out of my room for the next few hours, I should be okay."

They headed toward the waterfall. "We shouldn't have to keep hiding like this," Roberta said.

"He can't know. He just can't." On one hand, Pete could imagine his dad being thrilled that he'd found a girl. But they didn't go to the same school, or live in the same neighborhood, so naturally the question of how they met would come up. If Dad knew they met at a college guy's party, sharing a beer Pete had stolen from the fridge, when Dad thought he was at a movie, then Pete was as good as dead. "This is a guy who whaled on me because he thought I told him off. It was actually something on TV."

Pete and Roberta passed by the graffiti that covered the rock face and slipped behind the falls. Some of the water sprayed onto their backs. The cave went deeper, but they didn't need to go too far. It was already too dark for anyone to find them. He'd anticipated this night for what felt like forever—his first night alone with Roberta. However Dad reacted, whatever he was going to do, he couldn't take this away.

They'd hardly begun kissing before Roberta pushed him away. "I think I see something."

"Down there, further in." She moved away. "I don't think we're alone."

"No, it can't be." Pete could just barely see Roberta's face in profile silhouetted against a slight glow. She took out her phone and turned on the flashlight. "You're not seriously gonna check it out, are you?" Pete said.

"I'm just gonna look. If anybody's there, we leave."

Roberta turned a corner, then Pete. Just as he feared, there was someone in the cave with them. A man with a thick, Santa-esque beard slept under a grimy blanket. The light came from a small oil lantern, its flame dancing gently. Above it was a painting of the Virgin Mary, stars on her red veil, the Christ Child in her arms.

"We better go," Roberta whispered. "I don't want to bother him."

They headed back out of the cave, Roberta leading the way with her flashlight. "I'm sorry," she said, still with a soft voice. "I didn't think there'd be anybody here, much less they'd have a shrine. We'll just have to find some other place."

"I guess so." Pete felt like it would take forever to calm down, to think about anything other than the pressure of her body, or the taste of her lips. "What should we do instead?"

Roberta sighed. "I wish I knew. We can't keep sneaking around your dad forever."

"If I had somewhere else to stay, I'd feel better. Everywhere I go, I feel like he's right behind me."

They crept out in single file from behind the waterfall.

As soon as Pete saw the headlights, he pushed Roberta's hand down, the flashlight beam with it. "Don't move!"

Pete knew the sound of that terminally-ill engine anywhere. His father's Plymouth was idling on that side road, and Dad himself was wandering around, calling for Pete.

Roberta laid her hands on Pete's shoulder as they inched together behind the waterfall. Eventually Dad would give up and move on to look somewhere else, but that didn't help Pete. Eventually he'd have to go home. Eventually he'd face the music, and he'd have to call out "sick" for a week. All because he wanted to spend time with a girl he met at a party.

Pete heard a cough. And it didn't come from Roberta.

They both jumped with fright. The homeless man was standing behind them, holding the lantern. He coughed again, smelling like death.

"That shiner of yours sure looked bad," the man said. "No way for a man to treat his kid. And that molar he took out? Oof. What a pity."

"What?" Pete said. His tongue felt the spot where the molar had once been, before Dad knocked it out. "How did you…"

"Mary told me. Be right back, I'll take care of that noise. Wait here."

And the man walked out of the cave, letting the water from the falls brush against his shoulder. Pete and Roberta left behind him, but stayed in the shadows under the bluff.

"Ho, neighbor," the man said in a rough voice. "Can't trouble you for some change, can I?"

"Please? I just need enough for McDonald's." The man turned to the side and snapped, "No, I am NOT sharing it with you."

Roberta pulled Pete back behind the waterfall. "Oh God, I've heard of this guy! It's Crazy Steve!"

"Except he's not actually crazy. I have friends who've met him. They said he'd tell them things about themselves he couldn't possibly know."

"So he's psychic?" He'd have to be to know about the molar.

Outside, Crazy Steve and Pete's dad were still talking.

"Look," Crazy Steve said, "I can't fight the devil on an empty stomach. He's got hideouts all over town."

Pete's dad growled in frustration. If Pete himself acted like this, he'd get a beating, but of course Dad didn't pick on people his own size. "Just shut up for one second," Dad said. "I'm looking for my son, about seventeen, about yea big."

Pete peeked back out from the falls.

"Just me out here," Steve said, then, pointing to the empty space beside him, "Ignore this guy."

"Fine. Thank you. Here!" Dad pressed his hand on Steve's, then turned away. "That's all you're getting!"

Dad grumbled to himself, and his voice faded away as he headed back to the car. Pete leaned on the cave wall and let out a long exhale. The Plymouth rattled away to look somewhere else.

Crazy Steve returned to the cave, shaking his head. "Your father… Such a withered soul…"

"Here." Steve handed Pete a bill, the same bill his Dad had handed over.

Roberta shone her phone's light on it. "Twenty dollars?"

"It's dark out there," Steve said. "And your father was too angry to pay attention."

"I can take care of myself, Pete. Besides, it's more yours than it is mine."

Pete stuffed it into his pocket. "Thank you."

"But where's he supposed to go?" Roberta said. "If Pete goes home, his dad'll be waiting. He'll kill him."

"Yes," Crazy Steve said. "He will." He said it with such cold certainty, as if he had seen it himself. Pete grabbed Roberta's hand.

Roberta said, "If I had room at my place…"

Crazy Steve went on, "Roberta, I think your sister knows someone who can help?"

"How did you… Wow… You're for real… Pete, he's right. My sister's fiance has a spare room. I can give him a call." She checked her phone. "As soon as I can get a signal."

She stepped out of the falls and placed her call.

"Pretend like what?" Steve said. "Like I'm mentally ill? It's just so I don't start thinking I'm any kind of hotshot. I'm a sinner, nothing more. A sinner serving his Lord."

Pete dimly but distinctly heard his girlfriend say "Abusive son of a bitch" through the roar of the waterfall. Four words Pete found he wished he could say to his father's face. "Thanks again," he said to Steve. "How can I repay you?"

"Pete," Roberta said, running in under the falls, "he's on his way to pick us up. He lives about five minutes away."

"You two take care," Steve said. "Although… I know you're young, and you're crazy about each other, but do try to keep it in your pants for a while."

"What?" Pete said, "Maybe you should mind your own—"

Roberta clapped her hand over his mouth. "It was very nice meeting you, Steve," she said. "Let's go, Pete."

They sidled out of the waterfall and headed uphill toward the main road. Sitting on a bench at a bus stop, they watched the headlights that passed by, waiting for the one that would take them each to a safe night's sleep.

And the man known as "Crazy Steve" returned to his icon of the Theotokos, made the sign of the cross, and laid down and shut his eyes.