I don't really have much to say as far as introductions go, but that doesn't mean I didn't have a good time with this story. The hard part was just figuring out what kind of haunting these kids would run into. 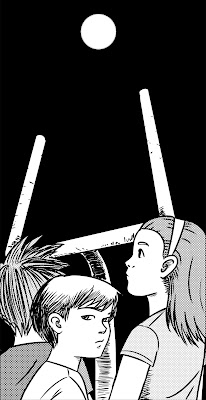 Strange things were said to happen on Creed Field.

Once, it had hosted the Rehnquist High School Panthers. The school had shut down a decade ago, and the field had been left abandoned ever since. Creed Field was now filled with dry patches of grass and weeds, and the concrete bleachers were cracked and chipped like ancient ruins.

Rumor had it that the field was haunted.

One night, three kids from the neighborhood, enticed by those rumors, came to sneak in.

The property was so run down that even the fence was falling apart. Twelve-year-old Geoff pointed his flashlight at the gash in the chain links. Thirteen-year-old Esme ran through without hesitation. Her little brother, Eleven-year-old Ira started after her, but then halted after one step. Geoff pointed the light at him. "Come on, what're you waiting for?"

If it weren't so dark, the others would have seen Geoff's eyes rolling. "Not again."

"It'll be fine," Esme said from the darkness. "If we get caught, I'll just tell Dad it was my idea. Now get over here!"

Ira ducked down and ran through the gap in the fence. Geoff went in right behind him.

"Honestly," he said to Ira, "you're lucky we're letting you hang out with us."

"Does this look like a date to you?" Esme said.

Geoff stung in his chest as if she were talking to him. He couldn't even bring himself to tell her he wanted one, not as long as she made Ira tag along. As it was, to her Geoff was just a kid she played with, and the idea of them getting together was just one of Ira's jokes.

It wasn't even as if Geoff didn't like Ira. They got along pretty well, actually. But it also wasn't as if Ira liked coming with them, either. Even now, Ira was muttering to himself, "…could be reading right now…"

Geoff whispered to Esme, "I thought you said he'd like this."

"I thought he would. Probably just nervous. I… didn't think it'd be this dark."

The three of them gathered at the nearest goal post. Most of the paint had flaked off. They could barely see anything, except what the flashlight showed them. On the wall under the bleachers was a mural of a panther, with half its face peeled off, surrounded by ten years' worth of graffiti. A full one hundred yards stretched ahead.

"Okay," Geoff said, "so the way I understand it, this ghost won't let anyone make it from one endzone to the other. But between the three of us, one of us has to be able to make it across." That, and if he himself could do it, Esme might see that he wasn't just another kid.

Ira said, "A-and what kinda stuff does this ghost do?"

"I heard it throws you fifteen feet in the air," Esme said. "Or slams you to the ground."

"Yeah, I heard that too," Geoff said. He heard Ira whimper. "I also heard it's just that there's a weird echo because of the way the bleachers are built. I dunno. I just wanna see for myself, ya know? I don't even believe in ghosts."

"Your loss," Esme said. "So we just run from here to there?"

"Run, walk, whatever. This ain't a race." Geoff turned off his flashlight. In the dark, he could still barely see the bleachers and the opposite goalpost in the hazy light from the road in the distance. "Ira, you ready?"

Esme broke off running with her usual track team speed. Geoff ran in a more leisurely jog, while Ira had a more unsteady trot. Their steps kicked up clouds of old dust and dead grass. Esme stopped about a quarter of the way and looked toward the bleachers as the others caught up. "Anybody else hear that?"

Geoff flicked his flashlight on and waved it. "Over here!" He asked Esme, "That better?"

"No, not that," she said. "From the bleachers. For a second, I thought I heard people… cheering."

"I heard something too, but it was real faint," Ira said. "It was a whole crowd, like we were in the middle of a game."

"I didn't hear a thing," Geoff said. But why only him? He wanted to believe something was here, if only so he could share it with Esme. "Let's keep going."

This time, Geoff walked, keeping his flashlight forward. He wanted to be sure if anything happened, he could stop and check it out. But so far the field was just as dead as it had always been. The floodlights were all rusted, the lightbulbs gone.

Esme stopped at the center, where the fifty-yard line might once have been, and yelled, "Hello? Hello? Hello?"

"What are you doing?" Geoff said.

"Checking for the echo, like you said. But I'm not hearing anything special. Ira, how you holding up?"

"I'm okay. I was just thinking… Did you know somebody died here?"

Esme said, "Now that I think about it… But I thought it was over at Midtown."

"I looked this place up online before we came out," Ira said. "And I found an article from twenty years ago. Turned out the Panthers quarterback had a heart condition. Dropped dead right in the middle of the game."

"I thought you knew. But if this place is haunted, maybe that's the reason why."

"Maybe." Geoff looked out at the expanse still ahead of him. Just fifty yards. Wasn't really that much when you looked at it. But still… Knowing someone's life ended on this very field… No wonder it was abandoned. How could anybody play here again? "Maybe we should go back."

"Oh no you don't," Esme said, starting to walk again toward the goal. "Not after you spent all week hyping this up. What's the matter? Afraid something'll jump out and yell 'Boo!'?"

"It's not that!" Geoff saw Ira trailing behind his sister and shot out after them. "I—I just kinda wonder if maybe this is… disrespectful."

"Disrespectful? It's not like that QB's buried here. Besides, it was twenty y—" Esme shuddered. "Did it just get really cold all of a sudden?"

A wind blew with a harsh moan. Geoff wrapped his arms around himself and saw a tiny cloud puff out of his mouth. It was the middle of summer, yet he shivered as if it were the middle of winter. "Agh—yeah, I feel it."

Then, just as suddenly, the wind stopped, and the summer heat returned, as much a relief as a warm blanket. The air still made a strange noise, though, almost like static on an old TV.

"What was that?" Esme said.

"Except what?" Esme and Geoff said in unison.

"Except the article I found about that quarterback… It was written in middle of January."

The floodlights flashed on.

Geoff, Esme, and Ira could all see each other clear as day. They were all standing on green, full, living grass. Bitter winter air blew against them. The static sound grew louder and louder, coming from the stands. Only it wasn't static, or wind, or anything like that.

"There it is again," Esme said.

And now Geoff could hear the crowd roar. The stands were empty, yet something about them seemed more alive than ever. The paint was clean and fresh. The panther's face was restored. Even the floodlights had shed their rust.

A strange mist gathered between them and the next endzone.

A football was falling toward them.

It hit Esme in the back and bounced high in the air, into Geoff's arms. As she doubled over, a strange urge began to come over Geoff. The ball was still in play. A voice rang in his ear, belonging to no one he'd ever met. "Run!"

But which way? Both goals seemed open, and Geoff didn't know what team he was on. He wasn't even wearing a uniform. All he knew was the clock was running.

"Geoff, are you okay?" Esme said, still rubbing her shoulder.

The mist gathered closer. As it did, some shapes began to form… the shapes of helmets, of shoulder pads, of solid walls with arms and legs.

He looked back, and saw Esme watching him, and began to run faster. This would show her what kind of man he was!

He took a dive over the line and rolled to a stop. A horn blared. The crowd let out a frenzied cry.

The floodlights went out. The football vanished. The summer heat blew the cold away. The ground around Geoff was once again patchy and dry. Esme and Ira came running toward him.

"Did what?" Esme bent down over him. "I just saw you run like crazy after those football players appeared."

"Yeah, we're fine," Ira said. "Those guys were just fog. All we did was get a little chill."

"But I got the touchdown. I got to the end. I crossed the field."

She pointed at the bleachers. They were in the same position as when the three of them started.

"You ran back the way we came."

Geoff saw the distance that now lay between himself and the opposite goal post. "Oh. Dammit. I was so sure."

"It's okay," Esme said. "We were all pretty freaked out. But we saw what we came to see. That was actually a helluva run. We should have an actual race sometime."

"You're on the track team, you'd mop the floor with me." Geoff's heart was still pounding so much, otherwise Esme's suggestion might have kicked it up. "But sure… Just name the time… and place. Just the two of us…" Did she hear that last part? It was so dark, Geoff couldn't tell.

"Anyway, I think we should go," Ira said. "The whole city probably heard you screaming." He turned on Geoff's flashlight. "You dropped it when you got the ball."

On the way back to the fence, with their bikes waiting on the other side, Geoff asked Ira, "So did you have at least a little fun tonight?"

"Maybe a little," Ira said. "Me and my sister got to hear you scream like a little girl."

Geoff was about to give him a smack in the back of the head, but then thought better of it. "Let's see you get a touchdown in the middle of January."