Weekly Story #37: The Wrath of Dencorah

Have I ever mentioned how much I like kaiju movies? One of my earliest memories is the scene in Godzilla 1985 where we see the Prime Minister's bunker shaking as Godzilla walks over it. So it seems only natural for me to write a story about a kaiju. Or at least, a story about the aftermath of a kaiju attack. 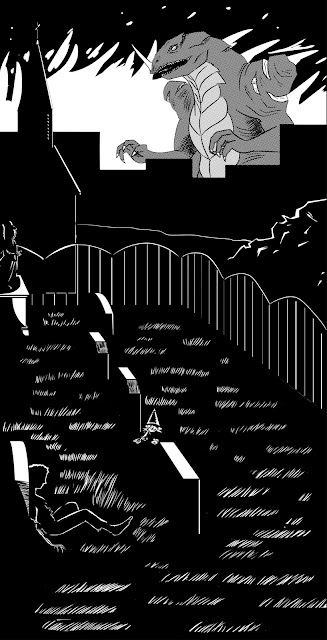 Lightning shot from the horn on its snout. The pylons on its shoulders lit up, then electricity filled the sky and the thunder echoed for miles. Windows shattered, trees burst, walls cracked. I remember writhing in pain, wondering how I was still alive after the initial strike. Then the creature started walking. I found an alley closeby, and managed to slip in, but there were many behind me who were too stunned to escape before the giant monster we came to call Dencorah trampled them flat.

I staggered through an alleyway to another street. At least, that's what I think I did. Before I first lost consciousness, I was running in a daze, smoldering, my entire body in pain, Dencorah's steps booming behind me.

No one had ever seen or heard of such a creature until it burst out of the harbor and destroyed several ships. Today we know more about Dencorah, even if there are still further questions. After Congressional hearings, special investigations, and debate in the media, the main result was prison time for a government geneticist named Dr. Michael Yamane, who worked for a lab in Raymondton. News reports made him out to be a mad scientist recklessly unleashing a terrible new weapon upon the world. Personally, I've never been satisfied by that answer.

After I was struck by Dencorah's lightning, the next thing I recall is stumbling into a graveyard by an old Baptist church. Dencorah never came down that way, although when I came to, I did find it had knocked down the buildings around the alley.

I drifted in and out of consciousness most of that night. The thunder still rang in my ears from earlier, though I could hear Dencorah's roar and lightning blasts in the distance. Every so often my right leg twitched. My shoes were missing, and my shirt was in rags. A few times I'd try to move, only to fall flat all over again. My head throbbed. Dreams blended in reality. One minute I was taking a test for a high school class. The next I was staring Dencorah right in the eye.

Eventually I woke up in a hospital bed. An IV drip was hooked into my arm. I heard groans nearby—there were other beds and other patients with me. An intern walked by and saw that I was awake. He came up to me with his clipboard, explained where I was, and said they were working on locating next of kin for every patient. "We couldn't find any identification on you. Can you tell me your name?"

Where had I left my wallet? I'd put it somewhere… left it in my car? But where did I leave my car? Why was I downtown in the first place?

"Again," the intern said, "can you tell me your name?"

"I… I can't remember…" It was on the tip of my tongue. Maybe it started with a G?

"Well, if you remember anything, let us know. The good news is, it doesn't look like you'll need surgery. You also don't seem to have experienced any cardiac or respiratory arrest. If you had, you probably would have died before anyone found you."

A few hours later, I did remember my name. It turned out a friend of mine had been looking for me, so the hospital gave him a call. I sat in the waiting room. The TV was set to the news, with the volume muted. By now the Internet had dubbed the monster "Dencorah," and the name had caught on. Nearly eight thousand people had been killed in its attack. Right now it was wading through the river, its horn sparking fires in its wake. That much I gathered just from the onscreen graphics.

My friend arrived and walked me to the parking lot. It took me a few minutes into the car ride to remember he was also my roommate.

"I literally thought you were a goner," my roommate said. "So many people…"

My right arm was tingling, as if I'd slept on it for two straight days. I turned the radio on, but instead of music, it was wall-to-wall coverage of Dencorah. My roommate turned it off.

"Come on," he said, "we don't need to hear about that." His head started to hunch down. "I don't know what we're going to do. Half the city's gone. I heard from my manager this morning. Most of my coworkers are dead."

I could barely even remember where I worked. I couldn't imagine that was in much better shape.

When I got home, I could hardly believe such a small apartment was my home. My roommate reminded me we had been living there nearly three years now. The first thing I did was open my laptop. My roommate might not have wanted to talk much about Dencorah, but I wanted, no, needed to know more. Surely it would help me piece my own experience back together. What was Dencorah? Why did it attack? What was going to happen next?

Various videos showed the monster bursting out of the water from different angles, right in the middle of the bay, right next to the harbor. I recalled hearing thunder at the time, some several blocks away, even though the sky was clear. Then came explosions. My car was probably scrap metal by now. I had just crossed McAdams Street when the crowds started rushing toward me. Why was I there? Oh, right, to go for a walk—nothing more, nothing less.

Various news articles traced Dencorah's path. It had waded its way down McAdams Street, then veered right on 12th Avenue, before turning back along 14th, passing by the graveyard where I'd lost consciousness. The National Guard lured it out of town.

I kept reading as much as I could about Dencorah well into the night. My roommate offered to cook me a frozen pizza, but the thought of shoving anything down my throat made me nauseous. How could I have survived when so many people didn't? It all seemed so arbitrary. In essence, a wild animal had run loose through the city streets. How was I so special that I deserved to be spared?

I had so many disjointed images in my mind, and I couldn't tell which were real. One in particular haunted me. Something in the monster's face.

Social media was hardly any help. Mostly just the same blurry photos and shaky videos the regular news outlets were showing. That, and desperate appeals by distraught survivors to find friends and relatives who were downtown at the time of the attack. All it did was make me hurt for everyone who had died. Beyond that, everyone seemed to blame the political figure of their choice. One person I saw even blamed vaccines for the monster. Honestly, kind of impressive.

My roommate laid a glass of water on the coffee table next to my laptop. "You need something," he said. "You catch the latest news?"

"So you know how they tried to fight it at the Edgewood exit?"

"No. Wait, yes. They used tank fire and flares to draw it out?"

"Right. The problem is, that horn zapped almost everything they threw at it. But check it out." He handed me his tablet, which showed Dencorah's arm. There was a line of red just below the pylon. "It's not bulletproof. Right now it's heading toward Raymondton. So they're setting up an array of lightning rods in its path. The idea's to dissipate the lightning so it's less likely to hit the rockets."

By now we know the plan worked—Dencorah was killed by a single missile right between the eyes. Until then, however, we could only speculate on what would happen. There was still so much speculation on what did happen.

"Yeah, it's weird," my roommate said. "Almost like there's something it wants there. I thought it'd make for the base at the foot of the mountain. But nope. It even passed right by the nuclear plant. It seems to know where it's going."

"Knows where it's going… Is… Is it intelligent?" Again, that image in my mind…

My roommate lowered his head. "I hope not. It's one thing to know so many people were killed. I don't wanna think about all of them getting murdered." He took his tablet back. "Come to think of it… One of the buildings that thing destroyed was that federal building downtown. And I don't mean he bumped into it by accident—he totally smashed it."

I remembered from the maps and timelines I'd read. Dencorah had turned around as soon as it crushed the federal building. I had assumed it got bored and started looking for something else to destroy. Now I wondered if it had simply accomplished what it came for.

I could have sworn it looked at me when it passed by the graveyard.

"No kidding?" my roommate said. "Looked right at you?"

"Loud and clear." My roommate looked at his tablet again. "Graveyard…" He flipped through and showed me a photo. "That's not you, is it?"

In the background was Dencorah, marching through a burning city, streams of electricity threading down from its horn. In the foreground was a small Baptist church next to a graveyard. And in that graveyard was a single figure, lying on the ground, his shirt and shoes scorched off.

"That is me." I was on my side, looking out at the monster. And the monster at least seemed to be looking back. "It has to be."

My leg twitched. And I remembered.

That look on its face. It looked at me, turned its head at me, saw me. I remember clenching up, waiting for a lightning bolt to finish me off. Its shoulder pylons lit up. The horn sparked. Then it flashed. I threw my arms up in front of me.

But nothing happened. No thunder, no heat, no pain.

I looked back up at Dencorah. Its eye remained fixed on me.

All Dencorah did was turn up the corners of its mouth, and continue on its path.

Dencorah had spared me, not out of mercy, not out of lack of interest, but as a joke. It had put me in its debt, a debt I could never possibly fulfill. The rest of my life, whenever my leg twitched, or I forgot something I'd always known, or my heart started to feel funny, I would think of that contemptuous grin, and remember that I was far from lucky.

The giant monster we now called Dencorah had simply allowed me to live, on a whim, as it passed its judgment on the rest of the city.