Not sure I really have much to say about this. I definitely wanted to deal with a mundane situation in a fantastic setting; to use a small event to suggest a bigger world and a bigger conflict; to throw the reader into that bigger world with no context. Sort of like starting Highlander: The Series with season 5. Oh yeah, it's also sort of an homage to Highlander. My friends and I were really into that in high school. 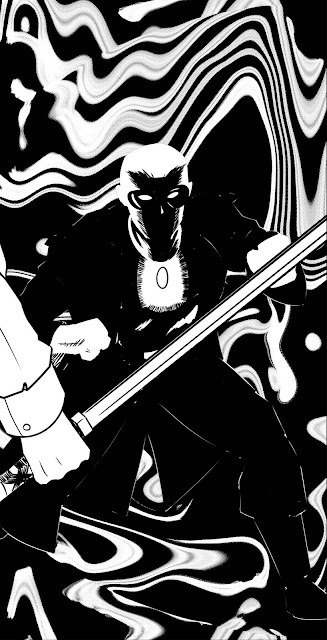 The subway train screamed to a stop. As the doors opened, I took a quick glance around the station, and saw only ordinary commuters, families, and tourists. I fired off a quick text to my supervisor, letting her know I'd just be another five minutes. Maurice had called in sick, so my day off had come to an end, and I had to go in and cover his shift.

I took the stairs up to the street. The rain that had been falling off and on for three days straight left the sky almost as gray as the street. Traffic on both the roads and sidewalks was still sparse. I headed to the crosswalk and waited for the signal to walk.

On the other side stood Otis Aguirre, glaring at me through aviator sunglasses, with glowing eyes the color of blazing coal. No, not today! Especially not now! He and his extradimensional comrades had been infiltrating our world for months, and and not only was I one of the people chosen to stop them, I'd also killed his brother.

(Well, "kill" may be the wrong word. From what I understood I'd only destroyed a physical manifestation. The actual being still existed in his home dimension. And "brother" is only the closest equivalent to whatever incomprehensible relationship these entities have. But that's beside the point. It's like the mafia. Punch one of them, don't be surprised if somebody comes to whack you.)

I checked the other corner. The red light had started flashing, but there were still people in the crosswalk. I dashed over to the other side, checking the time on my phone on the way. If I looped around the next block, I might make it to work with a minute to spare. I also needed to get Aguirre away from this crowd. When I reached the curb, I saw him crossing on the opposite side.

The light between us switched to "Walk."

I ran down the block to Broad Street and crossed the road without checking the light. Here there was hardly anybody around. Aguirre was right behind me.

I unhooked the handle of the Jeek blade from my belt and gave it a flick to throw the blade out. It was just in time to defend against a karate chop that could have taken off my head.

"You think you can get away that easily?" he growled.

"No." I touched the field generator on my belt. The area around me, up to a three-yard radius, went out of phase with our dimension, to keep our fight hidden from the public. "I'm just busy." I slashed toward his chest. "This isn't exactly my main gig, you know!"

He'd dodged, and now swiped at me from above. I blocked again. He kept the edge of his hand pressed against my blade. "Is that the excuse you gave my brother?"

"Nah. I had plenty of time to ice him." I ducked, bringing the sword down with me. In the split second I had before he figured out his next move, I thrust the blade straight through his gut.

I yanked it out, and he doubled over.

Then he started laughing. "You know it takes more than that."

"Yeah, I do." I checked my phone. I only had a few minutes left of actual time, and the distortion in this field was only stretching it out to four. "Look, can your revenge wait? I have to get to work."

"Ha! As if your time cards and name tags are more important than my vengeance!"

"Well they are. Who else is gonna cover the shift?"

Aguirre blinked, then broke out in big guffaws of laughter. Creatures like him didn't take any human endeavor seriously—no politics, no economies, no faiths, no traditions. I must have sounded like an absolute idiot to him.

I swung the Jeek blade. His head dropped off of his neck, and dissolved as it hit the ground. His body dropped to its knees, and scattered to dust in a matter of seconds, leaving only the flat purple jewel I could take to Highboss as proof of Otis Aguirre's defeat.

I pushed the button to retract the Jeek blade as I took the jewel. I had only a minute of real time left, but with the distortion around me, I could just barely make it in time. Normally I wasn't supposed to use these items for personal gain, but I figured it was worth it this time. I ran until I reached the door of my office's building. Thirty seconds of real time left. I turned off the distortion. If anyone were around to look, they would have seen me appear out of nowhere.

I opened the door, saying, "I'm here! I made it!" I went to my desk and clocked in. This wasn't the best job in the world, but it paid a heck of a lot more than any fights against extradimensional invaders. And I am definitely not about to let that get me fired.