Weekly Story #42: The Price of Art

Another story about a painting? There's a method to this madness.

First is that this was written during the first full week of Orthodox Lent. Since every Sunday has its own special commemoration, I decided to take a theme for each week and word associate from there until I had a story. This story came after the Sunday of Orthodoxy, which celebrates the restoration of holy icons to worship. From "Icon," I rather naturally got a story about a painting. Update (4/30): Turns out I was actually thinking of story #43, "Pest Control," which is coming later this week. I don't believe this one's word-association exercise was related to Lent.

Second is that it has some small basis in fact. Back in the 60's, my late grandmother found a bronze relief by Augustus Saint-Gaudens for about $5 at a local antique store. This one, in fact. Some of you may know Saint-Gaudens for his reliefs in the Capital rotunda, or the double-eagle coin he designed. That savvy purchase paid for college for all of her grandchildren, myself included.

And that's why I don't have any student loans, and am horrified that anyone does.

I combined that with a documentary I watched once with my grandmother, Who the $&% Is Jackson Pollock?, about a trucker who bought a painting at a yard sale and found it may have been a lost Jackson Pollock painting. But she couldn't sell it because the art community refused to believe it could have been Pollock, even when the paint was matched with his workshop and his thumbprint turned up on the back.

And finally, True Detective Season 3 had just ended, I was taking a break from work, and my roommate challenged me to write a detective story. So here it is!

THE PRICE OF ART 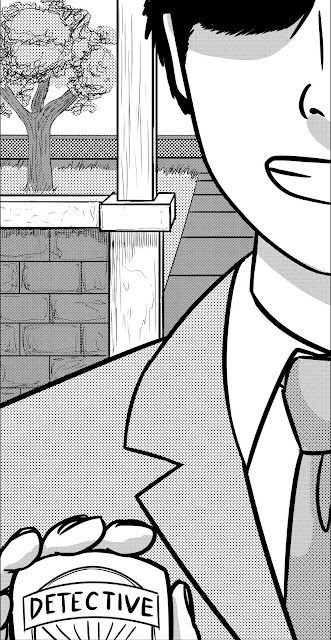 The doorbell rang, and Jackie peeked through the window before answering. A man in a gray suit stood on the front porch, glancing at her flower pots. Probably some salesman, or Jehovah's Witness. She flipped the lock and opened the door slightly. "May I help you?"

"Jacqueline Jarvis?" The man showed her his badge. "Detective Hoover. I'd like to ask you a few questions. May I come in?"

"I'll come out." She slipped through the door and shut it behind her. "Is something wrong?"

"Do you know a Ronald Netter?"

"Of course. From the antique store. Oh God, did something happen?"

"I'm afraid he was found dead at his store this morning. You were one of his last customers yesterday. I was wondering if you might know anything that might help."

"Are you saying he was murdered?"

Hoover nodded gravely. There was something oddly familiar about his eyes, but Jackie couldn't place him.

"Good Lord," she said. "What's going to become of the store? He hardly has any family. Was it a robbery?"

"Nothing seemed to be missing. The money was still there. You recently purchased a painting from him, did you not?"

"As a matter of fact, I did, about two days ago. How could that have anything to do with it?"

"Your order was up on his screen when he died. A painting by David Arnotte, correct? An artist like that, seems like you got it for quite a discount."

Jackie remembered her elation when she saw the price tag. Now she found herself shaking. "Right, only five dollars. Mr. Netter had never heard of him. He is… was… an antique dealer, not an art expert."

"I used to teach art history. Arnotte was never one of my favorites, but I'd know his style anywhere. And I couldn't let an opportunity like that slip by. Whoever sold it to him probably didn't know what he had, either." Jackie checked the street, saw only the one sedan. Surely if she were in any danger, he'd have brought backup. At least one other officer. But if someone were looking for that painting, and her address was on the monitor, then how could she be safe? "Shouldn't you be writing this down?"

"I see," Jackie said. Maybe she could see that holding up in court. "Mr. Netter said he got it from a young man who was clearing out his great-grandfather's estate."

"Hm." Hoover scratched his head. "Well, it just so happens that a rare Arnotte painting was reported stolen recently. There's a chance it may have wound up at Netter's store."

"Not at Netter's." Jackie shook her head. "He's no crook. He may not be an art expert, but he does his research. He wouldn't have taken it if he had any suspicion that it was stolen." She was starting to realize why she recognized this man.

"You're positive about this?"

"I have personally seen him call the police on someone who brought him a stolen vase." Jackie slid her foot a little closer to the door. "The world has lost an honest man."

She put her hand on the doorknob. "Just one moment."

"I might need to bring the painting in for evidence."

When it wasn't even at the crime scene? Whoever this "detective" was, he seemed more interested in nabbing the painting than Mr. Netter's killer. "Just one moment."

"Please. The killer could be looking for that painting. You could be next."

"You should have said so sooner." Jackie slipped behind the door. "I'll be right back." She got the door shut and turned the lock.

Jackie hurried into her living room. The painting stood propped next to her fireplace, with her photos of her children and grandchildren on the mantel. Her plan had been to sell the painting for what it was actually worth, and use the money to put the grandkids through college.

When she first saw the painting, she didn't just recognize the style, she recognized the subject. It was a portrait of Mr. Eustace Carver, founder of Carver carpeting, the employer of Jackie's dear departed father. Mr. Carver had himself only just recently passed away at the age of 95.

And "Detective Hoover" outside was definitely the spitting image of his great-grandfather.

But if Hoover—if that was his real name—was the killer, why hadn't he tried to hurt her yet? Maybe he'd gotten carried away with Mr. Netter, and didn't want to leave too much of a body count. You didn't necessarily have to be a criminal mastermind to commit murder. Or maybe he'd lied about Mr. Netter being dead in the first place.

"Yes, I was wondering if you had a Detective Hoover on staff."

"Let me check… No, I'm afraid we don't have anyone by that name."

Pounding on the door shook the whole house. "Are you going to let me in?" Hoover yelled.

Jackie cringed. God, give her just a little longer to see her new grandbaby. "Listen, there's a man calling himself Hoover on the front porch claiming to be a detective, and I think he may have killed Mr. Netter, the owner of Netter's Antiques."

Jackie heard the operator begin typing furiously. "May I have your name?" the woman said.

"Jackie Jarvis. I'm at 800 Frankincense Lane. He's trying to get in. Please hurry."

"Officers are on their way. Can you hold on until they arrive?"

They didn't take long. She'd hardly laid down the phone before she heard shouting, and loud thumps on the porch, followed by a knock.

Jackie peeked through the crack in the door.

On the other side was a uniformed police officer, with red and blue flashing behind him. "Ms. Jarvis?"

Jackie opened the door and welcomed him in. Another officer was leading "Hoover" into the police car. She poured some iced tea and gave the first officer a glass.

"Thank you," he said. "It's a good thing we got here when we did. He was just about to throw a flower pot through your window."

"He took a serious blow to the head, from one of his own antiques. But we got him to the hospital, and he's in stable condition."

"Oh thank God thank God thank God." Hoover must have only thought he'd killed him. Definitely not a criminal mastermind. And not savvy enough to know how valuable one of his own paintings might be. "You got here pretty fast."

"Your order was on his screen when he attacked. We were already coming to check on you."

Jackie let out a long, slow sigh. "To think, all that for this portrait."

The officer stepped over for a closer look. "Not very good."

"Well, Arnotte's never been one of my favorites, either," Jackie said. "But that man thought it was worth all this trouble. Who am I to argue?"