Okay, so it turns out my introduction from last week was a little bit off. This is the story where the word association started with "icon." How did I get from "icon" to a story set at a diner? That's the beauty part of word association, you never know what you're going to get. 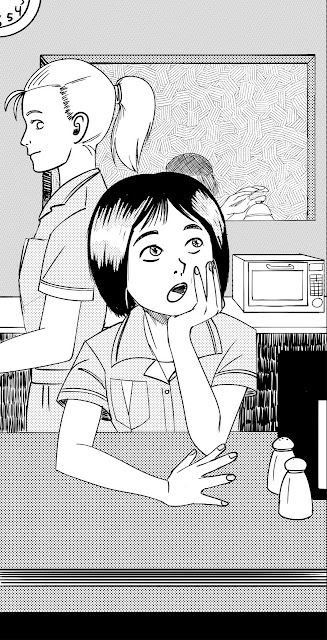 It was a diner much like many others. Open from seven AM to nine PM, Irene's served the truckers, travelers, families, and factory workers of the humble town of Constance. Now that summer vacation had arrived, her daughters were helping out with waiting tables, except Taylor, who preferred the kitchen. Sylvia, the youngest, had just scribbled down an order from the couple at table five, when she happened to glance outside, and spotted a familiar car rolling in. She passed the order slip to Nora, the oldest. "Looks like Mr. Sprite-Coke's here to see you."

Nora let out a long, long groan. "It's the third time this week. When is he going to take the hint?" He had been showing up at least once a week to see Nora ever since midterms, as if one more visit was finally going to sweep her off her feet. So far, no.

"You are not—" Nora switched to a whisper. "You are not spitting in his food. It was hard enough talking Taylor out of it." She poured the root beer and coffee for Sylvia's order. Taylor set a tray into the window and rang the bell. Nora gave the drinks to Sylvia and took the tray to the table in the corner.

The door opened with a jingle, and Martin Wolf strutted inside. "Afternoon, Sylvie." He took a seat on one of the barstools. "I'll have—"

"Half Sprite, half-Coke?" She bristled at the sound of "Sylvie." Made her feel like a little kid whenever she heard it. She was almost a teenager, dangit. "On its way." She laid a menu in front of him and went behind the counter for his drink.

Nora headed down the aisle behind him.

Nora kept going. She had another order to take.

Sylvia gave him his drink. He tipped well, but she remembered a time when Nora actually liked working here.

He sucked an inch through the straw. "Something wrong with her, Sylvie?"

"Yeah, she's got a pest that won't leave her alone." Sylvia kept her voice low so other customers wouldn't hear. She straightened up the condiments to look busy. "Can't figure out how to stop it."

Sylvia's hand lingered on the mustard bottle. She'd been wanting to try grossing him out forever. It was no spit in his drink, but why not see how far she could take it?

She lowered her voice further. "A rat. Actually, a lot of rats. Big ones. And they leave their droppings everywhere. Kitchen floor, seat cushions, you name it."

"Ew." Martin glanced at the menu. "I'll have a Philly cheesesteak. With fries."

Sylvia wrote the order down and passed it through the window to Taylor. "Cheesesteak! Fries!" The man must have a stomach of steel. "But yeah, I went to her place last week, and there were little bitty turds all over the place. Just a nightmare all the way."

"Has she been leaving traps?"

"Oh yeah. And we caught a few, too. It was actually pretty freaky." In real life, the only rat infestation any of them had ever dealt with was in the diner itself, years and years ago, and it was Dad who disposed of the one rat the trap caught. Then they found the hole it crawled through and had it sealed up. Not a single rodent since. "The first one we caught was still breathing. I wouldn't have known what to do, but Nora, she just took it out of the trap, picked it up, and gave its neck a quick snap. And that was the end of the rat."

Nora came behind the bar and rang up an order on the register. Sylvia couldn't tell how much she'd heard.

Martin gave the straw another drag. "Wow. Now that is hardcore."

"I know, right?" Sylvia said. "She was like an assassin. You wouldn't think from looking at her, would you? A sweet little thing like that?"

Nora looked back with a smirk, then went into the office.

"She's tough," Martin said. "Dunno if I could ever do that."

"Yeah, well, it hasn't stopped them. She wouldn't have this problem in the first place if she just kept her apartment clean. It's the worst! Dirty clothes, empty wrappers, pizza boxes. She's a total slob." Something told Sylvia he was the kind of guy whose ideal girl was a glorified maid. "She hardly even cleans her own bathroom."

"She and I got that much in common," Martin said.

Sylvia wished she could unlearn that. If he could handle that, then she was going to need to come up with some better ideas. "Well, your cheesesteak should be ready any minute. Let us know if you need anything."

Forget steel, this guy's stomach must be Space Titanium.

Sylvia went to the office, where Nora and Mom were chatting together by the desk. "I hope I'm not overdoing it," Sylvia said. It was actually starting to hurt to lie this much about her own sister.

"I only heard little snippets," Nora said. "Did I really snap a mouse's neck?"

"A rat, and you did now. You're also a colossal slob, but I'm a little worried he likes that."

"I didn't know you could think on your feet like that."

"I dunno," Sylvia said. "Once he brought up mice and bugs, I just thought, Okay, let's go! No filter!"

"We'll have to look into improv classes. Mom? Any ideas?"

Irene tapped her fingers on her desk. She preferred to ban customers only as a last resort. The last two were a guy she caught with a stolen credit card and another who made lewd comments at Taylor. As annoying as Martin was, he hadn't crossed that line yet. Yet. "Obviously spitting in his food is out."

"I'd like to stay on the health inspector's good side," Irene said. "But I like your approach. Nora, you have any moles or scars he should know about? If not, could there be?"

"Um…" Nora backed up from her mother's desk. "Okay, now I think we might be overdoing it."

The bell rang from the kitchen. Taylor had finished an order. "I got it," Sylvia said. "And Mom, you've given me inspiration."

Nora said, "I think we created a monster."

Sylvia hurried out, grabbed the plate from the kitchen window, and took it to the couple at table five. The bell then rang for the cheesesteak. She ran back and laid it in front of Martin. "Much obliged," he said. And he took his first bite. After everything Sylvia had already said, he was still willing to stuff that hunk of bread and meat down his throat. She half expected his Space Titanium stomach to start shooting lasers and rockets.

Strips of roasted dead flesh hung off the end. A hunk of cheese oozed out of the bun onto the plate, bringing an onion down with it. The onion looked almost like a worm crawling in slime.

"Wha?" Sylvia forced herself to tear her eyes away. "I just—never mind. Is there anything else I can do for you?"

"Get me your sister's number?"

She started to move away from him. She needed to take her mind off of that cheesesteak. But no, not yet, not when she still had her mission for Nora. "Actually, that cheesesteak reminds me…" Just as long as she didn't yark while saying it. "Nora also had this nasty boil on her leg recently."

He stared back at her, but kept chewing.

"Yeah," Sylvia said, "about the size of a quarter. Nora couldn't even shave her leg while it was there, and it got so hairy. She finally had a doctor lance it, and she said there was so… much… pus…"

Her eyes stayed on the cheesesteak, that moist, viscous cheese dripping onto the plate. Her stomach felt like it was trying to strangle itself.

The front door opened, the bell jingled, and a woman with three kids came and claimed table four. "Well, I gotta get that," Sylvia said.

"Nice talking to you," Martin said, then took another bite. With his mouth full, he added, "Hope Nora feels better."

"Uh, thanks," she said. As she turned away, she muttered, "I hope I feel better."

She took menus to the family that had just entered and took their drink orders. As she poured their sodas and iced teas, she made a special point of not speaking to Martin, even when spoken to. And he did speak to her. "My compliments to the chef. This cheesesteak is fantastic."

Sylvia just nodded in response. Taylor would probably be happy to hear it, as long as no one told her it was Martin who said it. But where was Nora? Was she just going to stay in the office until this guy left?

Sylvia took the drinks to the mom and three kids, and asked what they wanted to eat. Their order was: two plates of chicken strips, one with fries, one with tots; tomato soup and Greek salad; and… a Philly cheesesteak.

"Well, that man over there was raving about it," the mom said. "So I thought, why not?"

"All right," Sylvia said. "Your food will be ready shortly."

She passed the order slip over to Taylor, and went back to the office. "I overdid it. Nora, can you take over table four?"

"Come on, I don't even wanna look at food right now. It's my turn to take a break."

"You're about due for one anyway," Mom said. "Go ahead and take five, Sylvia. Nora, you're up."

The doorbell rang not once, not twice, but three times.

"I don't wanna talk about it."

There was now a trucker with a newspaper sitting a few seats to the left of Martin, an elderly regular named Joan, and a man in a black suit at table two. Nora offered to take the trucker, and Sylvia could take the old lady. The black suit would get whoever got to him first.

Joan just wanted her usual, some water and a grilled chicken with rice and chili. The black suit ordered a cup of coffee and asked about the pie selection. On her way back to the kitchen window, Sylvia heard the doorbell ring. But this time it wasn't a customer entering. It was Martin leaving. A twenty dollar bill sat next to his plate.

"I don't believe it," Nora said. The two of them turned away from the customers. "Barely said hi to me, then looked at his sandwich, put it down, and walked out. I've never seen anything like it. What did you say to him?"

"I'll tell you later." Sylvia felt one last pang in her stomach, then reached for the coffee pot. "You think he's gone for good?"

"I don't know," Nora said. "But at least he's out of my hair today. Thanks a lot. Tonight, whatever dessert you want, it's my treat."

"Thanks." Sylvia took the water and coffee and started back off for the tables. Something was crawling up her throat. "I'm sure I'll appreciate that eventually."

Oh, the sacrifices she made for this family, for this diner.