Continuing with last week's Lent connection, this one came following the Sunday of St. Gregory Palamas, who defended Orthodox teaching about the Uncreated Light. So I started the word association out of the word "Highlight." As you can probably tell by the opening line, unlike "Icon," this one's keyword managed to survive into the full story.

After the previous story focused on sisters, I decided to focus on brothers for this one. I also liked the idea of writing something with all the really off-the-wall stuff happening in the background.

One important update: As of this writing, as of this coming weekend, I will have 52 stories either published or cued up for this series. The last story should come up the second week of July. Excited? I know I am! 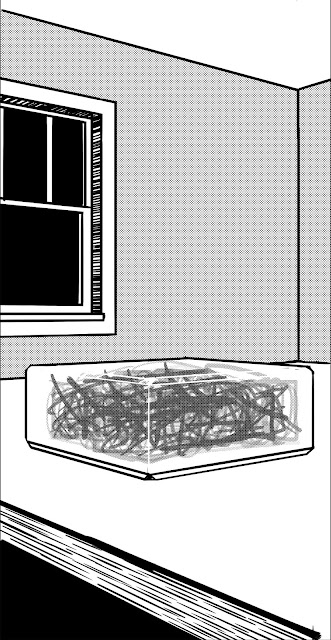 Ray started off by highlighting each of his lines. His character only appeared in two scenes, but he was determined to get it right. Just because he was an amateur didn't mean he had to sound like one. The thought of auditioning had just hit him out of the blue a week ago, and while he didn't get the part he tried out for, the fact that he got a speaking part seemed encouraging.

The problem now was just where to rehearse in private. He shared the house with his mom and his three brothers, and they could crowd him out fairly easily. Mom was out bowling with her book club, so at least tonight he didn't have to make any demands on her. The others all stayed home. Neil, the oldest, agreed to leave him alone. His day job at Best Buy had worn him out enough that he just planned to stay in his room all night. That left the other two.

Ray went upstairs and knocked on their door.

"Come in." Bart and Drew were tinkering with one of their new gadgets in the corner. Drew had joined his high school's maker club, and Bart wanted to start one at his middle school. Seemed like they were always working on something these days. Drew was even saving up for a 3D printer. Their gadget glowed with an eerie color. "What're you guys working on?"

"We're not sure yet," Drew said. "I got this doohicky from somebody at that maker faire last week, and I'm just kinda slapping parts together to see what they do."

"They do anything interesting?"

"Got it." Ray held up his script. "Well, listen, I got a part in that play I auditioned for—"

"I didn't get that part. But rehearsals start tomorrow, and I do need to practice my lines, so if you could do me a solid and—"

"We'll be quiet," Drew said. "We were just gonna keep working on this stuff all night."

"Right." Ray backed out of the room. "Don't call unless it's an emergency."

"Sure thing. Mind closing the door?"

Ray did so, and returned to his room. Those two had gotten a lot closer, and a lot easier to handle, once they found a hobby to share. And he trusted them well enough. He just wanted to be sure.

He went to his bedroom and locked the door and sat down at his desk. His character first appeared in Act II, Scene 3, so he started reading from there. Each highlighted line he recited out loud. Once he got through the scene, he started it over, to make sure he got the enunciation and emotion right.

The entire house shook with several loud booms and shouts coming from the boys' bedroom. Once Ray's desk stopped rattling, he rushed out to the hall and banged on their door. "Drew! Bart! You all right?"

Drew opened the door a little and peeked out. "Um, yeah. We've got everything under control here. Sorry about the noise."

"Yeah, I'm fine." Bart looked through the crack in the door and waved. "Just a minor accident. Totally fixable."

It was hard for Ray to tell through the crack, but certainly they didn't seem to have any cuts or bruises or anything. He pushed in. "You sure everything's safe?"

"Totally," they both said, pushing back.

"All right then." Ray backed away from the door. Neil had come out of his room and was looking at Ray with worry. "They say they're fine," Ray told him. "And they seem fine."

"Well." Neil nodded. "I sure hope so. How's the rehearsal coming?"

"Not too bad, at least until those two ripped open the spacetime continuum."

Ray started from his first line, and got to the end of the scene. Just as he uttered the last word, another noise came from the boys' bedroom. This one was more of an oscillating warble. It faded out after a few seconds, then Bart chimed up, "Everything's fine!"

Ray moved on to the next scene.

More noises came from down the hall, each more unidentifiable than the last. What on earth were those kids doing in there? None of their video games sounded like that, and there was no way it was coming from their little tinker-toy. At times he wanted to check on them, but then, he did tell them they could come get him if it was an emergency. They hadn't come to him, so maybe it wasn't an emergency.

Then the house shook again, this time together with the warble.

Ray got up and hurried to the boys' door and threw it open without knocking. To his surprise, most of their stuff that wasn't already on the floor was still off the floor. The device they were working on was still glowing on the desk. All that was missing were the boys.

Neil came to the door and shoved around him to get in. "Where are they?"

"I think they felt that across the state line. Okay, Drew. Okay Bart. You can come out now."

Ray wouldn't have blamed them for trying to hide when they were shaking the house off the foundation. "Don't worry, we won't tell Mom." He was about ready to take that doohicky away from them, if it weren't glowing like that. Anything to get back to the play.

Ray checked under the beds while Neil looked in the closet. "Where the hell are they?" Neil said.

"They couldn't have gone out the window," Ray said. "It's still locked from the inside."

"You didn't hear them run out, did you?"

"No. But where could they have gone?"

Neil stayed upstairs and searched. Ray went downstairs and checked the living room, dining room, and kitchen, but found no sign of the boys. No one could have broken in. None of the doors or windows were damaged. The boys' shoes were still sitting by the door, too. Unless they'd gone out barefoot, they should by all logic be somewhere inside.

Ray looked into the garage, but the boys weren't there, either. Forget rehearsals—how could he think about acting when his brothers were missing? If they didn't turn up soon, he'd have to call the director and drop out of the play.

What would he and Neil tell Mom?

He heard a warble from the living room, followed by Drew's voice. "We made it! Bart, we're home!"

Ray rushed in. Both of them were covered in dirt, their clothing frayed, their hair gone wild. Drew was holding a broadsword, Bart a spear. Drew dropped his sword with a clatter and threw his arms around Ray. "Ray! I thought I'd never see you again!"

"I, uh…" Ray could only estimate. "About ten minutes?"

Bart whistled. "Only ten minutes? It took, what, three hours just for you to save me from the—"

"Whoa, quiet." Drew broke away from Ray and pressed his hand over Bart's mouth.

Neil came down the stairs. "Oh. There they are. Where the hell did you get those weapons?"

Drew slowly lowered his hand. "Would you believe… the kingdom of Ishkoth?

"Look," Ray said, "I don't care where you got them or what anyone does with them. You've been making noise all night, and it's got to stop. Now, I've got to read my lines, Neil's got to rest, and Mom's got to come home to a house that hasn't been blown to smithereens."

"Okay, okay," Bart said. "We'll stop working on that thing. Piece of crap's been nothing but trouble anyway."

"We understand, Ray," Drew said. "And frankly, I feel like I've been swinging a sword around for hours, so I just wanna lie down. Please don't tell Mom anything happened, okay?"

"We won't," Neil said. "We're just glad you two are safe. You had us worried for a minute there."

"Yeah, sorry about that. I swear, if I ever find that guy from the maker faire again…"

And everyone went back upstairs, with Neil taking the weapons so he could stash them in the attic. Ray watched the boys take their doohicky apart, then headed back to his own room to practice.

Shortly after he started his second scene, Drew knocked on the door, yelling, "Keep it down! I'm trying to sleep!"