Weekly Story #45: Getting to the Last Laugh

As of this week, I now have fifty-two short stories completed, with the remaining seven just waiting for revision.

Today's story was written after the Sunday of the Holy Cross. I wound up latching on to two incidents from the same day back in 2008 that were about equally unpleasant. I had actually written a separate story with the same premise a few years ago, but decided to start fresh.

This week's story is brought to you by the letter H. Which is the letter on my laptop's keyboard that broke off before I could write this introduction.

GETTING TO THE LAST LAUGH 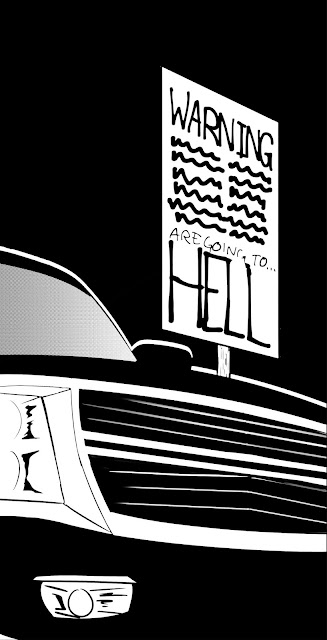 "Oh for the love of God," Marlene said on the other line. "That was our ride. That was my ride."

"Glad to know you're so concerned about my safety," Stan said. He could still see the sheen on the knife that the carjacker had pointed at his heart earlier. The police officer he'd reported to had just driven off. "I could have died."

"Right. I know. Sorry. It's just, we've already been through so much hell getting ready for this gig. This is just icing on the cake."

"You think I don't blame myself enough?" If Stan hadn't forgotten his bass, he'd never have left the show, never have stopped for gas, never have a knife-wielding weirdo ask for his wallet and keys. Now he was waiting for an Uber in a gas station parking lot with no idea where Marlene's SUV and car keys had gone. "How long do we have before we're supposed to start?"

"The opening act's about to go up, so about an hour."

"Know if they're any good?"

Stan's stomach hurt just thinking about it. "Look, it'll be fine. Shows at Last Laugh never start on time." His phone shook with a new notification, and a tan Honda rolled into the parking lot. "Hey, my ride's here. See you soon."

Stan hopped into the backseat. "The Last Laugh, down on 9th, and step on it."

"Sure thing." The driver entered the location on his phone, and it picked up the directions. "Okay. That shouldn't take us too long." He had a shaved head and flecks of gray in his beard. "Name's Bill. How's your night been?"

"Could be better," Stan said. "Car got stolen."

"Wasn't even mine. It was my bandmate's."

"She is. And—" Stan slapped his leg. "And my bass was in there. The entire reason I left the Last Laugh in the first place. The cops better find it soon. And the creep who took it. I hate tonight so much."

The car turned onto Holtz Avenue, and slowed down a good distance from the next stop light. "Uh oh," Bill said.

Stan dropped his head into his hands. "Oh come on. Doesn't your app warn you about traffic?"

"It's supposed to. Damn thing doesn't work half the time. I'll see if I can find an alternate route."

Stan looked ahead out the window. The line of cars stretched from here all the way to the exit and on down the Interstate. "Must be some kinda wreck. I better let the band know."

He sent a text to Marlene.

She wrote back immediately:

You're lucky I don't kill you as soon as you get here.

I'd borrow somebody from the opening act, but good lord they suck.

As if the traffic jam and carjacker were his fault. Right now all he could do was sit back and wait for any suggestion of movement. These side roads wouldn't help, because the venue was on the other side of the Interstate. Bill would have a tough time finding that alternate route. Heck, half of this jam was probably people squeezing under that bridge trying to avoid that exit.

"No kidding. I play bass, too. My buddies and I played at the Last Laugh back when it was the Iron Lion."

"You don't say. What was it like back then?"

"Pretty much the same. That chameleon mural still there?"

As they came to the next block, Stan began to hear a buzzing, like a voice out of a distant loudspeaker. Further onward, and it turned out that was exactly what it was. A scrawny man stood in front of a vacant pawn shop ranting into a mic, his voice blaring indistinctly out of the distinctly red speaker beside him. In his other hand was a leather-bound Bible.

The man who'd held Stan at knifepoint was listing off all the people who were going to hell, from Catholics to gays to libertarians. "For all have sinned, and fallen short of the glory of God!"

The loudspeaker still had Marlene's Bonnaroo sticker on the side. And that was her SUV parked nearby with the headlights blazing.

"Man, it's one thing to see those guys at events downtown," Bill said. "But who looks at a traffic jam and thinks that's an opportunity?"

A friggin' car thief, that's what. Stan took a picture and sent it straight to Marlene, who replied:

Now the question was, what was Stan supposed to do? He couldn't go out and try and take the SUV back. The cops were still looking for it, and it'd probably be suspicious if someone found him with a stolen car, especially one he himself had reported stolen. Besides, the man out there may be wiry, but Stan wasn't exactly a fighter. He had no guarantee he could take this guy in a fight.

He still had the card from the police officer who'd taken his report. The sensible thing to do would be to call up and let him know.

The car was rolling up right in front of the preacher. Stan rolled down the window.

"… and you shall know that I am the LORD. And… You, citizen!" He gestured his Bible at Stan. "Do you have any prayers you'd like to offer?"

"No, I'm good," Stan said. The guy probably couldn't see him too clearly. "Just…" He leaned a little out the window and took some more pictures of the preacher. He pointed at his phone. "You forgot something at the gas station."

The preacher gritted his teeth. "And this is just the sort of thing the Lord God warned us about. Overreliance on smartphones. Slavery to technology! Attachment to apps!"

But the preacher's voice was shakier now. He was stuck and he knew it. There were no side streets around the pawn shop. It only let out into the jam. Even if he did try to drive off, he'd have to take the same side roads as everyone else or wait until a gap opened across every single lane for a left turn. And how was he supposed to know he'd run into his own victim just a half hour after they last crossed paths? Stan guessed the preacher got stuck in traffic too, and decided to pull over and indulge in a separate hobby, annoy the people around him in a different way.

Stan called up the officer. "So this might be hard to believe, but I'm in that traffic jam on Holtz, and I just found the guy who stole my car. You know the abandoned pawn shop near the Wendy's? He's parked in front of it."

"Thanks," the officer said as Stan nodded to Bill. "We'll get here as soon as we can."

Luckily the left lane was all clear. "Man, what are the odds?"

"I know, right?" Bill said. "When my car got stolen, it took three months for anyone to find it. Turned out the thief had had it repainted. By then I didn't even want it back."

"At least you found it quickly. Want me to find a place to pull over until the cops arrive?"

"Yeah, might as well." If Stan was going to be late, at least it'd be because he was getting everything back. He just hoped he'd still be in shape to play tonight's set. He'd never had such an exhausting stop at a gas station in his life.